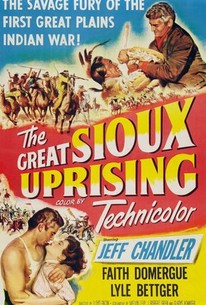 In this western, a surgeon goes out West and becomes an equine veterinarian after he suffers a debilitating injury. He winds up in Laramie Junction where he hopes to settle down and enjoy the peace and quiet. Unfortunately, the town is also the home of a shady horse trader who pretends to be an upstanding rancher, but is actually a rustler who steals his stock from the neighboring Sioux and sells them to the army. The other ranchers distrust and despise him for his sleazy buying tactics. Soon the Sioux catch on and begin fighting back. The newly arrived vet makes a deal with the Sioux chief to help calm the situation. Instead of having the ranchers sell through the rustler, he makes it so they can sell their stock directly to the army. The rustler retaliates by framing the doc and almost succeeds in getting the Indians and the ranchers alike to turn against the good doctor. When the army gets involved, an all-out war almost occurs, until the doctor clears his name in the nick of time, stops the war, and gets the rustler arrested.

A corny western, burdened down with stilted dialogue and stagey characterizations.

There are no featured reviews for The Great Sioux Uprising at this time.