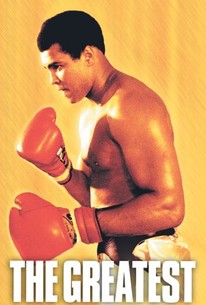 With Muhammad Ali cast as himself, The Greatest covers Ali's life from his "Cassius Clay" days to the celebrated Ali/George Foreman bout. Along the way, the film focuses on Ali's conversion to Islam and his potentially career-breaking decision not to serve in the Army. Ernest Borgnine palys Ali's first trainer Angelo Dundee, while Roger E. Mosley shows up as Sonny Liston. The Greatest was the final directorial effort from the late Tom Gries. The same subject would later be covered in Michael Mann's Ali, starring Will Smith as the champ.

Fernand A. Larrieu Jr.
as Grocer

Drew Bundini Brown
as Himself

Rahaman Ali
as Himself

Howard Bingham
as Himself

W. Youngblood Muhammad
as Himself

Lloyd Wells
as Himself

Pat Patterson
as Himself

Gene Kilroy
as Himself

Harold Conrad
as Himself
View All

Critic Reviews for The Greatest

The odds are seven to two that it won't go 15 rounds at the boxoffice.

The Greatest is about a once-great fighter but it isn't a great fight film.

Audience Reviews for The Greatest

Essentially this is two films: one with fascinating footage of the time around Ali's first title triumph and then subpar footage of the reclaiming of the title from George Foreman. You can't take your eyes off of Ali inevitably. The real man is still somewhat shrouded in mystery for me. This was a good glimpse.

In this movie you can see the story told by the man himself... and played by him as well! Following young Cassius Clay`s struggle against prejudice and discrimanation from his Olympic cold win to the famous Rumble in the Jungle, the fight against George Foreman! Muhammad Ali is a natural performer and in this film he is managing not to go overboard! The best part of the script is that just concentrates itself with hard facts . I'll have to say that without Ali we would never know about him turning up at Sonny Liston`s house at the dead of night to throw insults... and that is the advantage of this movie! It is like some kind of documentary reconstruction of a remarkable life... and it`s all true! I'll have to say that I enjoyed the performance of Phillip MacAllister playing the young Cassius Clay Jr displaying the engaging affrontery of a young talent so sure of himself that discretion in self-description knows no bounds... real Ali's characteristics which will later refine through formal discipline, professional conflicts and the controversial refusal to be inducted in the US Army. Movie with a message... and important part of a history story which should be told!