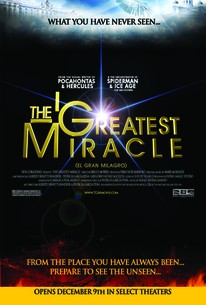 The Greatest Miracle is an inspiring story which illustrates hope and faith. The story revolves around the lives of three characters who are in crisis: Monica, a widow and the mother of a nine year old child, doing everything she can to keep her house; Don Chema, a public transport driver who receives the news of a disease which can eventually lead to the death of his son; Doña Cata, an adult woman who feels her mission in life has already concluded. And what they cannot imagine is that something is about to change their lives forever. With the help of the Guardian Angels, they will witness the true meaning Mass, the constant struggle between good and evil and the triumph of faith. -- (C) Official Site

Critic Reviews for The Greatest Miracle

There are no critic reviews yet for The Greatest Miracle. Keep checking Rotten Tomatoes for updates!

Audience Reviews for The Greatest Miracle

A film that Catholics will fascinate them, their stories are "moving" but unfortunately have very negative points, such as the animation straight out of the Sims game in the end this film is compulsory for Christians but for other people not much. Another negative is that the story falls church be joined, or in a mass a long time and no development, but to give a message uncertain and questionable.