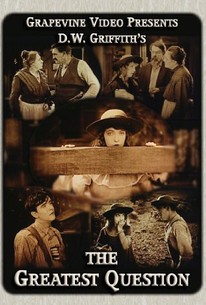 As a child, Nellie Jarvis (Lillian Gish) witnessed a murder, but it only remains a shadowy memory. After the death of her parents, she is taken in by a poor but honest couple, the Hiltons (George Fawcett and (Eugenie Besserer). To help pay for her keep, she goes to work for a very nasty pair of neighbors, the Scrubbles (George Nichols and Josephine Crowell). The Hilton's oldest son is killed in World War I, but they are comforted when they visit his grave, and his spirit appears to them, insisting that they hang onto their farm. Nellie, meanwhile, is being brutalized by the Scrubbles; she's saved from an attack by Mr. Scrubble only because the jealous Mrs. Scrubble catches him. The second time Mr. Scrubble tries to have his way with Nellie, her memory of the murder comes back in sharp focus; the Scrubbles are the killers. This time she is saved by the Hilton's youngest son, Jimmie (Robert Harron). Oil is found on the Hilton's land, and Jimmie and Nellie promise themselves to each other. The picture, D.W. Griffith's first for First National, features beautiful pastoral photography, courtesy of cameraman G. W. "Billy" Bitzer. The spiritualist angle, with the dead son returning to visit his parents, was inserted because it was hot subject matter at the time; Sherlock Holmes author Sir Arthur Conan Doyle and British physicist Sir Oliver Lodge had both brought spiritualism into temporary prominence.

Critic Reviews for The Greatest Question

There are no critic reviews yet for The Greatest Question. Keep checking Rotten Tomatoes for updates!

There are no featured reviews for The Greatest Question at this time.