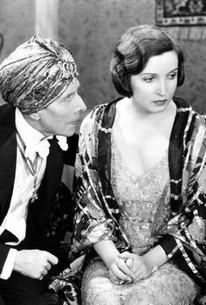 Engine trouble forces an airplane to land with a trio of passengers in the mythical kingdom of Rukh. Major Crespin (Harry T. Morley), his wife Lucille (Alice Joyce), and Dr. Basil Traherne (David Powell) are taken to the Rajah (George Arliss), the educated and satirical ruler of Rukh. The three passengers are held while negotiations take place to release the Rajah's three brothers from an enemy camp. The Major takes solace in his liquor (in a supposedly Moslem country?) as the trio awaits their fate. The story is taken from the successful stage play by William Archer.

George Arliss
as The Raja

Critic Reviews for The Green Goddess

The hammy George Arliss also starred in the 1923 silent version of The Green Goddess.

There are no featured reviews for The Green Goddess at this time.