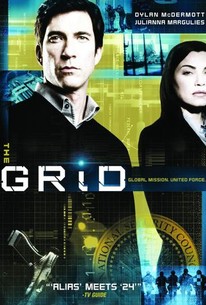 The high stakes of international terrorism and the challenges of keeping it in check set the stage for this power action drama miniseries. Maren Jackson (Julianna Margulies) is an National Security Council director who is attempting to fend off possible actions by a terrorist cell following a poison gas attack in London. Jackson enlists the aid of Max Canary (Dylan McDermott) of the FBI and Raza Michaels (Piter Marek) from the CIA in the United States, while CIA counter-terrorism expert Acton Sandman (Tom Skerritt) coordinates operations with British intelligence chiefs Emily Tuthill (Jemma Redgrave) and Derek Jennings (Bernard Hill). Leading the terrorists are Muslim extremist Muhammad (Alki David) and his second-in-command, Kaz Moore (Barna Moricz), though one of their associates is a doctor (Silas Carson) whose passion for the cause is tempered by his distaste for Muhammad's eagerness to use violence to achieve their ends. The Grid also features supporting performances from Robert Forster, James Remar, and Paula Devicq.

Critic Reviews for The Grid

Fully realized, three dimensional characters may be too much to expect, but imagine how much more effective the drama would be if that were provided.

There are no featured reviews for The Grid at this time.