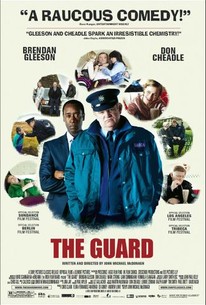 Critics Consensus: A violent, crackerjack comedy with a strong Irish flavor and an eminently likable Brendan Gleeson in the main role.

Critics Consensus: A violent, crackerjack comedy with a strong Irish flavor and an eminently likable Brendan Gleeson in the main role.

Critic Consensus: A violent, crackerjack comedy with a strong Irish flavor and an eminently likable Brendan Gleeson in the main role.

The Guard is a comedic fish-out-of-water tale of murder, blackmail, drug trafficking and rural police corruption. Two policemen must join forces to take on an international drug- smuggling gang - one, an unorthodox Irish policeman and the other, a straitlaced FBI agent. Sergeant Gerry Boyle (Brendan Gleason) is an eccentric small-town cop with a confrontational and crass personality and a subversive sense of humor. A longtime policeman in County Galway, Boyle is a maverick with his own moral code. He has seen enough of the world to know there isn't much to it and has had plenty of time to think about it. When a fellow police officer disappears and Boyle's small town becomes key to a large drug trafficking investigation, he is forced to at least feign interest when dealing with the humorless FBI agent Wendell Everett (Don Cheadle) assigned to the case. -- (C) Sony Pictures

Mark O'Halloran
as Garda No. 1

Christopher Kilmartin
as Young Man in Car
View All

News & Interviews for The Guard

View All The Guard News

Critic Reviews for The Guard

The Guard offers an offbeat take on a genre without skimping on the violence or gunplay.

Although The Guard is primarily a language romp, it's also a terrific showcase for veteran pug-faced character actor Brendan Gleeson.

Brendan Gleeson is a blooming marvel.

The film is foul-mouthed and not without its flourishes of violence but it's irresistibly likeable (and unpredictable).

Boyle is probably the first screen hero in a long time whose heroism comes out of boredom and ennui. He gives nihilism a good name.

Flipping the street cop and well-to-do dynamic of 'Beverly Hills Cop' on its head, Cheadle's uptight Yale graduate is suitably stuffy when plonked in the Irish countryside.

The Guard offers just over 90-minutes of excellent escapism and guaranteed hilarity that is still worth seeking out even a decade after its original release.

A quirky buddy-cop film with an excellent cast led by magnificent Brendan Gleeson, fast-paced and with a rarely-seen quantity of witty dialogues.

Raucous and depraved, but also one of the most entertaining, darkly comic detective movies in recent memory.

In what could have been a routine run-of-the-mill murder, drug trafficking, mob/cartel action flick, we instead have a film that explodes with life, filled with subversive humor, laugh-out-loud funny comedy, caustic and callous wit...

Debbie Lynn Elias
Behind The Lens
View All Critic Reviews (139)

Audience Reviews for The Guard

Sometimes the politically most incorrect characters are the most fun, like Gleeson's Irish cop who takes pride in his prejudiced and racist attitudes. How he ends up working with a black FBI agent is a bit contrived but also hilariously funny at times. It helps that the villains are putting up a great fight as far as charisma goes, especially Mark Strong is a reliable force. A really dark sense of humor a midst sudden bursts of violence makes for an unpredictable and highly entertaining experience. Typically Irish, if you will.

Fun while it lasts. Take that with some grains of salt.

As my many Irish friends will attest, (and be the first to tell you), there's a certain something about the culture - a knowing cynicism wrapped up in a heart as big as the world... a poet's soul wrapped inside the brash exterior. This holds true for this beauty of a film as well. Writer/director John McDonagh someone to watch after his equally well toned In Bruges, does an Irish Tarantino here with lovely, hilarious dialog and a dark humorous tone, while still showing us a character that you can't help but love, warts and all. In fact, it's these warts that make him all the more human, and in the personage of Brendan Gleason, the character of "the guard" comes off as a big loveable bear. Opposite this world wise, wise cracking Irish officer is Don Cheadle as an FBI officer who shows up in Ireland following the case of a drug ring and must put up with the antics of Gleason. This oil and water mixture has its comic moments as well - and if we're talking witty send ups, one could argue that McDonagh is not only lampooning buddy films, but the entire premise has echoes of the dynamic of "In The Heat of The Night". The comedy is often crass, and occasionally acid tongued, but in this instance it all seems natural and not for any cheap laugh. For an example, after a romp with a couple of call girls (dressed up in guard uniform), Gleason starts having an itch down there. When one of the villains asks him about the discomfort, Gleason tell the man that he perhaps had a tad too much fun with the lasses from Dublin. The villain replies "Dublin, well then ye got what ye deserve". The beauty of this scene also comes from the fact that there seems plenty of time to talk, and yet it all seems so natural that a villain would ask these type of questions while holding Gleason at gunpoint. In a nutshell, the tone of the film is perfect and true to itself, and once again, a scene from the film personifies not only Gleason's character but the wink in the eye nature of the film itself. At one point Cheadle looks at Gleason and says "I don't know if you are totally brilliant or a total idiot"... Gleason turns and gives the perfect smile - truth, sarcasm and mystery all rolled into one.