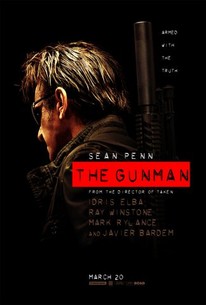 Critics Consensus: With an uninspired plot and rote set pieces that are overshadowed by its star's physique, The Gunman proves a muddled misfire in the rapidly aging Over-50 Action Hero genre.

Critics Consensus: With an uninspired plot and rote set pieces that are overshadowed by its star's physique, The Gunman proves a muddled misfire in the rapidly aging Over-50 Action Hero genre.

Critic Consensus: With an uninspired plot and rote set pieces that are overshadowed by its star's physique, The Gunman proves a muddled misfire in the rapidly aging Over-50 Action Hero genre.

News & Interviews for The Gunman

View All The Gunman News

Critic Reviews for The Gunman

The Gunman doesn't shoot blanks, but it is never fully loaded.

Part of the problem is the script's determination to drag some of Spain's most scenic spots into the action whether or not they suit the mood.

If you want a thriller about architecture, here is your thing. Gaudi with Guns, they could have called it.

Rarely, though, have two Academy Award-winning actors been so stunningly off the mark in the same movie.

I object to The Gunman because it's unconvincing and incoherent.

A novel by Jean-Patrick Manchette provides the source material, but the only real "auteur" here is Morel, for whom this is very much more of the same.

It is largely a clichéd scaffolding for certain violent set pieces, which are interesting as formal exercises of a kind, but have no long-lasting emotional or any other kind of impact, except to further inure audiences to killing and brutality.

Thrillers don't get much more generic than this.

One of the major components that hurts the picture is Sean Penn, who possesses no personality or charisma.

Everyone's gotta take a job to pay the bills once in a while in today's movie game. Even a decorated practitioner of the acting crafts like Oscar-winning method man Sean Penn.

The Gunman wants to be something much greater than it is. The political element is tacked on, the story is not nearly as intricate or clever as it thinks it is, and the whole film is drastically overlong.

The Gunman is a propulsive and fairly well-crafted action film like its predecessor. Unfortunately, it suffers far more from its barely functional screenplay and plot.

Audience Reviews for The Gunman

A rather bland political thriller, The Gunman clumsily tries to mix action with political conspiracy. The story follows a former military contractor named Jim Terrier whose past comes back to haunt him when a group of mercenaries come looking for him. The action is pretty good, but the politics are extremely ham-fisted and aren't incorporated into the film very well. Featuring Sean Penn, Javier Bardem, and Ray Winstone, the cast is quite impressive and they give some strong performances. However, the script is weak and does give them much to work with. Still, there's a fair amount of mystery and suspense as Terrier tracks down those who are behind the attempts to kill him, and learns who he can and cannot trust. The Gunman isn't really a bad film, it's just poorly executed.

A tough, mature and grown-up action movie, Director, Pierre Morel solidly hits his mark with a story with tons of suspense, character development, spectacular action and a awesome cast. An explosive and gritty action-packed edge of your seat thriller. It's an electrifying and pulse-pounding film. Sean Penn is riveting, he perfectly fits the mantle of action hero and is welcomed to the crowd of mature stars. It also have fantastic performances from Ray Winstone, Mark Rylance, Javier Bardem and Idris Elba.

Gunning for a raspberry at an automatic clip, musclebound Sean Penn's attempt at becoming a Liam Neeson-style action hero unfortunately causes the audience to recoil with every pump of the trigger. Oh, the titular character certainly looks the part, cut like an UFC fighter and angrier than Christian Bale on the set of Terminator Salvation, but the deathly serious tone laughably handicaps what amounts to an expensive bullets and brawn B-Movie. Treating the same B-Grade material with an almost fanatical religious sternness, the story laughably misfires as well. Injected with a personal political bent by the producer, the already uninspired story becomes even duller when the lead a paycheck-cashing assassin retires to become a virtuous do-gooder, building wells and third world hearts before his past comes back to haunt himone of many such heavy-handed instances. In this R-rated actioner, a former Special Forces soldier and military contractor (Penn) suffering from PTSD tries to reconnect with his long time love, but first must go on the run from London to Barcelona and across Europe in order to clear his name. The producer, of course, also proves to be the star: Sean Penn, an actor known for sticking liberal foot in mouth on many an occasion. While the well-meaning actions of his character are far from an egregious affront away from the confines of the script, here they become self-important grandstanding. Worse, Penn (a very deserved Best Actor Oscar winner for Mystic River and Milk) inhabits the part with the same laser-intensity as with Dead Man Walking. This is the same actor who reportedly took swipes at Nicolas Cages thespian credentials when the latter starred in Con Air. At least Cage knows how to literally roll with the punches with tongue firmly in cheek. Perfect physical specimen Penn kicks and hits like the best of them but, in approaching The Gunman like it was an Ingmar Bergman masterpiece, his character quickly becomes more expendable than an Expendable. Bottom line: I Am Sham