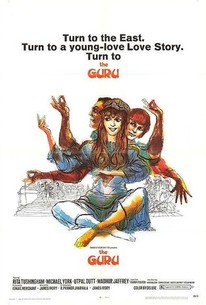 Tom Pickle (Michael York) is the British rock star who travels to India to learn the sitar from Ustad Zafar Khan (Uptal Dutt). Much to the dismay of his aggressive agent Chris (Barry Foster), he leaves the money-making music world behind to learn about the exotic Indian instrument. Khan believes Tom lacks focus but has the talent, and a young hippie girl arrives (Rita Tushingham) who has the focus but not the natural talent that Tom possesses. There is a romantic angle between the hippie-girl Jenny and Tom, but it is more implied than demonstrated. Soon the Guru Khan is besieged by women who all try to capture his attention. He becomes frustrated over the lack of spiritual commitment of his students, as the rocker contemplates his return to swinging London town. ~ Dan Pavlides, Rovi

Leela Naidu
as Girl at Party

Ismail Merchant
as Master of Ceremonies

Critic Reviews for The Guru

The central character naturally is the guru himself, and it is here that Ivory and his leading actor have brought off a brilliantly funny and touching character study.

Perhaps Ivory's real talent is for the sort of farewells which everyone welcomes with rather more relief than they allow themselves to admit.

There are no featured reviews for The Guru at this time.