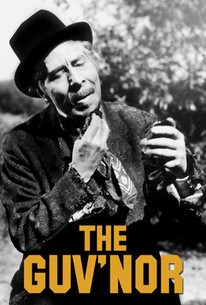 Eminent British stage star George Arliss is a most elegant tramp in The Guv'nor. Though shabby and indigent, Arliss seems to have a lot more financial savvy than most of London's established financiers. Through a fluke, Arliss is mistaken as a member of the Rothschild family (the actor did, after all, star in 1934's House of Rothschild) and is made a bank director. Not only does he save the Empire from ruin, but he also takes time out to play Cupid for the requisite young lovers. In other words, The Guv'nor is a standard George Arliss vehicle, despite his rags and tatters. The film was released in the US under the title Mister Hobo, which sounds more like a Mattel action figure. ~ Hal Erickson, Rovi

George Haynes
as Dubois
View All

[George] Arliss admirers are sure to enjoy it.

I am not an admirer of Mr. Arliss, but I found this film rather more tolerable than his recent appearances as the family Wellington, the family Voltaire.

There are no featured reviews for The Guv'nor (Mister Hobo) at this time.