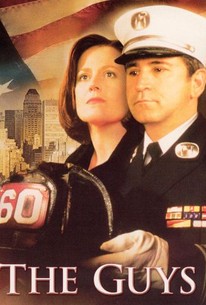 Adapted from a stage play by Anne Nelson, a drama centering on a slice of the aftermath of the 9/11 tragedy. Nick, a fire captain, who lost eight men in the collapse of the World Trade Center, enlists help from an editor, Joan, to prepare their eulogies. Nick builds a relationship with Joan, who helps him put together the difficult, heartfelt speeches that he must deliver with honor, humor and poise--all the while, navigating his way through his own emotional response.

Critic Reviews for The Guys

Weaver, LaPaglia and director Simpson have little problem keeping us involved as they grapple with conflicting feelings in the ways nearly all Americans did.

A well-intentioned misfire that doesn't work in the way it intended.

A noble attempt, but not much more.

One of those rare and exemplary motion pictures that is likely to make audiences of strangers want to hold hands.

If anyone needs reminding of those profound post-9/11 feelings, now or later, The Guys will be there to do it.

The sobriety of the play has been preserved at the expense of the movie.

The occasional intercut of fire department surveillance camera footage isn't exactly making the most of the cinema medium.

Painfully earnest but sporadically quite moving...

The Guys accurately reflects all the helplessness and directionless determination of those unreal days.

If you want an idea of what New York was like in the immediate days after 9/11, here you go.

[An example of our instinct to] moderate collective tragedies into easily-digested cud for bovine mastication on the Oprah show.

Audience Reviews for The Guys

This is a tough movie to comment on, because i want to like it as i love Anthony Lapaglia and Sigourney weaver is amazing in this but it is a slow movie, really emotional and depressing and just not very much going on, i think they could of added a bit moreto this movie but it was nice to see a different view from what happened on 9/11! This movie reminds me of Flight 93 also known as United 93 although not very much going on a bit slow and you could say boring but its harsh to say this when its based on real events and is truly sad. Like Flight 93 at the end it made me blubber it dedicated the movie to the fallen firefighters and listed every single one of there names and it got really emotional and sad! Anthony Lapaglia plays a chief fireman who is ment to write something for memorials of his fallen men but cant think of anything to write so he asks for a journalist played by sigourney weaver for her help and between them they write speeches! This movie is majority set in weavers house with just te two of them talking! If you want excitement then this isnt the movie for you! Really this film isnt predictable becuase its hard to see where this movie is going because you sort expect more from this movie but it just doesnt cut it! i guess its worth a watch because it is a short movie and does get emotional!

A good movie but a really odd choice of a movie to make.

Not the best as far as a MOVIE goes, but the theme behind it was real good. It's def. a good tribute too the men, and I respected that - but not a good "Movie", as far as that sense goes. Rather, a good documentary, I'd say, though. Sigourney Weaver, didnt do that great of a job, I didnt think either, personally. Anthony LaPaglia does great though.