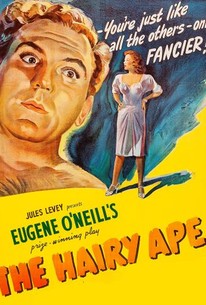 Despite a few Hollywood compromises, The Hairy Ape remains one of the more artistically successful filmizations of Eugene O'Neill. William Bendix is nothing less than brilliant as ship's stoker Hank Smith, a brutish but sensitive lug who is convinced that his strength is derived from the hair that covers his body. While Hank's ship is docked in Lisbon, the boiler room is visited by the wealthy-but-bitchy Mildred Douglas (Susan Hayward), the mercenary sweetheart of second engineer Lazar (John Loder). Disgusted by Hank's hirsuteness, she calls him a "hairy ape." At first enraged, Hank becomes fascinated by the beautiful Mildred, and before long is openly lusting after her. For her own selfish purposes, Mildred leads him on, laying the groundwork for the disastrous events that follow. In the original O'Neill play, a maddened Hank enters the cage of a circus gorilla, believing himself to be "one" with the huge beast, only to be crushed to death. For reasons that defy explanation, this ending is eliminated from the film, which concludes a discordant note of banality. If for no other reason, The Hairy Ape is memorable for one of the few post-Citizen Kane appearances of actress Dorothy Comingore, here cast as Susan Hayward's rival for John Loder's affections.

Bob Perry
as Bartender
View All

Critic Reviews for The Hairy Ape

As a whole, the film is most certainly better than average and its ironical ending not without its own value.

The basic character... is particularly well portrayed, both so far as the part itself is concerned and in the interpretation by William Bendix. He imparts to it all the ape-like qualities that could exist in a man in line with the O'Neill play.

One of those films that profits in some tiny but intriguing way from being such a bastardization of the source material.

The dialogue couldn't be cornier.

Audience Reviews for The Hairy Ape

There are no featured audience reviews yet. Click the link below to see what others say about The Hairy Ape!