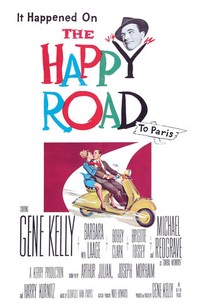 American in Paris star Gene Kelly returned to the City of Light as both star and director of The Happy Road. Kelly and Barbara Laage play single parents with one child each. Gene and Barbara don't know each other at the outset, but are drawn together when their kids run away from their Swiss boarding school. Kelly and Laage realize that the two children wouldn't be so unhappy with their lot if their parents would marry again. The parents, having fallen in love, oblige. The Happy Road tends to bludgeon its audience with whimsy at time; Gene Kelly, as always, is charming, and less affected than usual.

T. Bartlett
as Earl of Boardingham

Critic Reviews for The Happy Road

Whimsical comedy that fails to maintain the charm it dishes out.

Audience Reviews for The Happy Road

Plods along to no purpose.