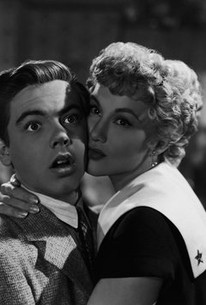 The Happy Time was adapted from the long-running Broadway play by Samuel Taylor, which in turn was based on the novel by Robert Fontaine. Set in Quebec during the early part of the 20th century, the film concentrates on the activities of a large French-Canadian family headed by Charles Boyer. Most of the humor arises from "coming of age" complications and sexual awakenings, especially when worldly prodigal son Louis Jourdan returns to the fold and exercises his influence on impressionable young Bobby Driscoll. Not permitted to include the racier portions of the play, director Richard Fleischer compensated by adopting a frenetic, farcelike pace, which works about half the time. Happy Time was later musicalized on Broadway in the 1960s, with Robert Goulet in the Louis Jourdan part.

Maurice Marsac
as The Great Gaspari

Will Wright
as Dr. Marchaud

Critic Reviews for The Happy Time

The Happy Time takes a sweet look at a twelve-year-old being indoctrinated into the mysteries of life in 1910 in Ottawa.

There are no featured reviews for The Happy Time at this time.