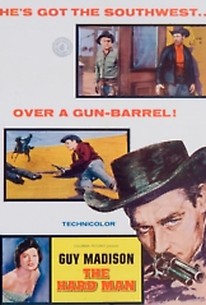 In this western, a Texas Ranger quits his job after he is chastised for bringing back so many dead outlaws. When he gets a deputy sheriff's job, he soon finds himself mixed up in a range war against an avaricious rancher determined to have the whole range for himself. The deputy simultaneously begins an affair with the greedy rancher's wife who wants him to kill her husband. In the end, she kills him herself. ~ Sandra Brennan, Rovi

Robert B. Williams
as Herb Thompson
View All

Critic Reviews for The Hard Man

A well-knit western. It stays close to the familiar pattern.

There are no featured reviews for The Hard Man at this time.