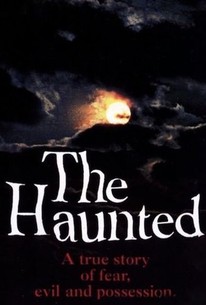 The Haunted is a Fox Network TV-movie purportedly based on eyewitness testimony. The story goes that in the mid-1980s, the Smurl family of Pittston, Pennsylvania began noticing something askew in their four-bedroom Victorian home. Apparently there are agents of Satan at work, bedeviling the family and smashing the crockery. None of the Smurls believes in ghosts--"until," as the ad copy for this film proclaims, "they have no choice." Since this film was shown on Fox, the "standards and practices" people were a wee more lax than they would have been on another network; hence the "Parental Discretion Advised" tag on the film's original telecast. The Haunted is some distance removed from believability, but stars Sally Kirkland and Jeffrey DeMunn seem to be having a high old time playing scared.

Parker Whitman
as Herb
View All

Critic Reviews for The Haunted

There are no critic reviews yet for The Haunted. Keep checking Rotten Tomatoes for updates!

Audience Reviews for The Haunted

This movie is freaking scary. It's not released on DVD yet, but if you can try to find a copy of this. Actually they have the full movie on YouTube in different parts. Watch this one alone at night and it will send chills down your spine. A truly eerie and spine tingling movie! It was a made-for-TV movie so don't expect any gore, language, or any violence of that kind. It's also based on a true story. The True Story: "The Smurl house was split. Jack and Janet lived in one half of the abode while Jack's parents, John and Mary, lived in the other half of the semi-detached house. According to the Smurls, the first signs of paranormal activity began in 1974. They reported that a television set burst into flames, and a stain appeared on a carpet overnight. Water pipes began to leak even though they were repeatedly resoldered by a plumber, and scratches resembling those from a large cat appeared on paintwork and bathroom fittings. By 1977, the reported events were escalating. Toilets flushed without human intervention, footsteps were heard on the stairs, chest drawers opened and closed unaided, radios worked when they were not plugged in, rocking chairs rocked while empty, and a sour smell filled the house. In 1985, John and Mary claimed to hear loud, obscene language, and Jack and Janet's house became often extremely cold. Two days after this, an icy cold swept the house and a strange black human shape allegedly materialized in the kitchen in front of Janet. It was about five feet nine inches tall, and with no facial features. It later appeared to Mary Smurl in her kitchen. The violence and frequency of the events continued to escalate. In 1986, the family brought in a controversial pair of demonologist, Ed and Lorraine Warren, who announced the house was haunted by three minor spirits and a powerful, evil demon. They tried to persuade the demon to leave by playing holy music and praying. The alleged demon reacted by shaking mirrors, dressers and drawers. Jack alleges he was raped one night by a scale-covered succubus with a young girl's body and an old woman's head. Janet also claimed she was sexually assaulted by a shadowy humanoid figure (described as an incubus), and that pig noises were heard from the wall cavities. The attack on Janet and the shadowy apparition are similar to the description of the attacks on Carla Moran that were portrayed in the movie, "The Entity". The Smurls brought in Father Robert McKenna. He conducted two exorcisms in Latin and more than fifty Catholic Masses, which allegedly infuriated the demon further. The demon was said to follow them on a vacation to the Pocono's and harass Jack at work. It was at this point the Smurls appeared on television on a Philadelphia talk show called The People are Talking hosted by Richard Bey. The demon allegedly reacted by raping Jack again, and appearing to him as a half-man, half-pig. Janet was throttled and thrown about by invisible forces. One obvious question that skeptics always ask is why the couple did not move out of their house if the attacks were so violent and distressing. The Smurl's response being that the demon could apparently follow them anywhere; having shown this to them when they abandoned the house for a week only to be intensely harassed at the campground where they were staying." Truly frightening movie! Scared me more when I was a kid but it definitely still packs a punch. Typical made-for-TV cheese in some parts but never takes away from the truly creepy tension. Highly Recommended! Memorable chilling quote from The Haunted... "...Jaaaaanet." (still gives me the heebie-jeebies, lol) Try reading the book also, "The Haunted: The True Story of One Family's Nightmare." It gave me nightmares for months. There's even a warning label on the back of the book about how intense it really is. It was actually even written by Ed and Lorraine Warren themselves.