The Haunting of Helena2013 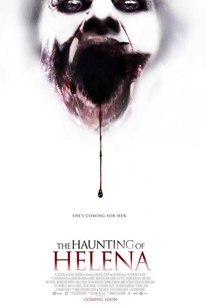 The Haunting of Helena Photos

After a divorce, Sophia moves to the south of Italy with her daughter, Helena. Their new home, an apartment within an austere building of the fascist age, is a chance for them to start a new life. But inside an old storage room hides a mysterious closet and a buried secret. After the loss of Helena's first baby tooth, a chilling obsession begins and an apparition haunts her sleep. Dreams become nightmares. Nightmares become reality. When Helena collects her classmate's fallen teeth with an urgent hunger, it is clear that there is far more to their new home than can be seen. Sophia finds herself in a terrifying fight to save her child while maintaining her sanity. THE HAUNTING OF HELENA will keep you at the edge of your seat as it slides in agony along the sharp blade of psychological terror. (c) Bloody Disgusting

Susanna Cornacchia
as The Fairy

Critic Reviews for The Haunting of Helena

It doesn't offer anything new to the genre, but chugs along pretty well until the plot holes begin to pile up.

This update of the Tooth Fairy legend takes the familiar and tries to make it terrifying but horrendous dialogue and weak performances will aggravate even the most forgiving horror fans.

Yet another ghost story that insists there's nothing more chilling than a professional woman charged with raising a child on her own.

Audience Reviews for The Haunting of Helena

There are no featured audience reviews yet. Click the link below to see what others say about The Haunting of Helena!

The Haunting of Helena Quotes