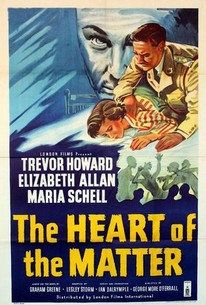 The Heart of the Matter Photos

Heart of the Matter is a faithful if somewhat austere adaptation of the same-named novel by Graham Greene. Set in Sierra Leone during WW II, the film stars Trevor Howard as assistant police commissioner Scobie. While his wife Louise (Elizabeth Allan) is away on vacation, Scobie falls in love with Helen (Maria Schell), the widow of a U-boat victim. Scobie would like to get a divorce from his wife, and she from him, but their Catholicism prevents not only this break but Scobie's planned remarriage to Helen. In despair, Scobie chooses a desperate means of solving his dilemma--which only furthers to exacerbate the religious quandary in which everyone finds themselves. Posing several ethical questions throughout its 105 minutes, Heart of the Matter wisely allows the viewers to come up with their own answers. ~ Hal Erickson, Rovi

Critic Reviews for The Heart of the Matter

The photography is beautiful. the direction is sensitive, but somewhere along the line it was found expedient to throw away the entire point of the book.

Without attaining the rare dignity of classic high tragedy, this is an unrelievedly gloomy melodrama...

There are no featured reviews for The Heart of the Matter at this time.

The Heart of the Matter Quotes