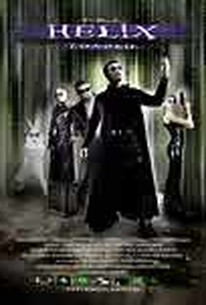 One of the biggest and most influential sci-fi hits of the 1990s gets raked over the coals in this comic parody of The Matrix. Nuvo (Scott Levy) hangs out with a group of pals who have an inordinate interest in getting high, and like his buddies he's always interested in the next new chemical to come along. Nuvo and his friends Swatch (Brigett Fink), Chad (Dane Moreton), and Theo (Vanilla Ice) have heard about a new drug called the Helix, but while they'd like to give it a try, word on the street is that it has rather unpredictable effects -- used properly, it can give its users deep enlightenment, but a bad trip can literally cause you to lose your mind. Nuvo's interest in the Helix is more philosophical than recreational, and he falls in with two mysterious figures, Infiniti (Samantha Brooke) and Orpheum (Dana Woods), who are searching for The One -- a person who can break through to a new level of understanding while tripping on the Helix.

Critic Reviews for The Helix... Loaded

There are no critic reviews yet for The Helix... Loaded. Keep checking Rotten Tomatoes for updates!

There are no featured reviews for The Helix... Loaded at this time.