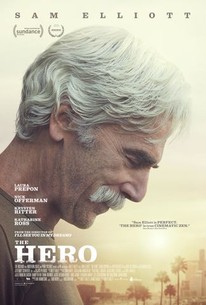 Critics Consensus: The Hero rests on Sam Elliott's understated performance, which proves more than capable of carrying the film through the less inspired moments of its somewhat clichéd story.

Critics Consensus: The Hero rests on Sam Elliott's understated performance, which proves more than capable of carrying the film through the less inspired moments of its somewhat clichéd story.

Critic Consensus: The Hero rests on Sam Elliott's understated performance, which proves more than capable of carrying the film through the less inspired moments of its somewhat clichéd story.

Lee Hayden (Sam Elliott) is an aging Western icon with a golden voice, but his best performances are decades behind him. He spends his days reliving old glories and smoking too much weed with his former-co-star-turned-dealer, Jeremy (Nick Offerman), until a surprise cancer diagnosis brings his priorities into sharp focus. He soon strikes up an exciting, contentious relationship with stand-up comic Charlotte (Laura Prepon), and he attempts to reconnect with his estranged daughter, Lucy (Krysten Ritter), all while searching for one final role to cement his legacy.

News & Interviews for The Hero

New On DVD This Week: Wonder Woman, The Big Sick, and More
The Mummy Should Have Stayed Buried

View All The Hero News

Critic Reviews for The Hero

It's one of his finest and most memorable performances. Unfortunately, the script fails to rise to the level of Elliott's artistry.

Two good things are not enough to goose this all-too-familiar tale of a selfish man who wakes up one day, realizes that he blew it and scrambles to fix it before it's too late.

The script around him doesn't do Elliott or the character justice, and is a missed opportunity at a late-in-life comeback role for the one-time Western star.

Is there an American actor of more meaningful solitude than Sam Elliott?

Haley gave Elliott the gift of this career-defining role and Elliott returns the favor by giving a career-best performance.

While the film is a journeyman effort, The Hero's love for Elliott shines through in every scene. If you want to see an oft-supporting player get his due, this is the film.

Sam Elliott is in almost every frame, bringing an easy charm that solidifies his leading man status while smoothing over the film's rough patches.

The Hero is about as good as these stories get without someone masterfully inventive behind the camera, and it doesn't aim much higher than merely being effective.

The Hero is perfectly ragged around the edges, but rugged and elegant at its core, like many of our heroes. Seek this one out, partner.

With more emotions than the exegetes of Westerns would have preferred, [director Brett] Haley achieves an honest and luminous movie. [Full Review in Spanish]

It's Elliott's insight that makes a film like The Hero, which covers absolutely no new ground in the memento mori subgenre of drama, feel almost essential.

Audience Reviews for The Hero

Sam Elliott stars in the indie character drama The Hero. The story follows a washed up actor named Lee Hayden who strikes up a romance with a younger woman and struggles to come to terms with his cancer diagnosis. Elliott gives a strong performance and is backed by a solid supporting cast, including Laura Prepon and Nick Offerman. However, the script is a little weak and leaves a lot of things open-ended and unresolved. And the directing is also rather underwhelming. While it has some compelling performances, The Hero is held back by its poor storytelling.

Sam Elliott gives the best acting in a movie so far this year. Very poignant and moving as his character moves gracefully into an unwanted retirement and has to face his mortality. (7-16--17)

Sam Elliott needs more leading roles. As an aging, undercast actor facing his own mortality, he is entrancing. Coincidentally, he plays that exact role in "The Hero". His character, Lee, is past his prime, and instead of playing his cowboy typecast, he's voicing BBQ sauce ads and struggling to find work. Upon his diagnosis of pancreatic cancer, he begins to reevaluate his future and his past by doing copious amounts of drugs and getting involved with a much younger woman played by Donna from "That 70s Show". If you've seen "Birdman" or "The Wrestler" you aren't going to be surprised by Elliott's rocky relationship with his estranged daughter or his brief stint going viral on social media, but the trailer left out that he smokes a lot of pot with Nick Offerman. The film hardly breaks new ground in terms of storytelling, but amidst the familiar plotting is some genuine sentimentality, humor, and a sense that these characters are real people. Admittedly, I'm a sucker for sad old man movies like "A Man Called Ove" and "I, Daniel Blake". This film isn't as good as either of those, but like Natalie Portman in "Jackie", Elliott has an outstanding performance in a film that wouldn't be justified without him. It winds down fairly slow by the third act and has a few too many ending fake outs, but altogether the film is a satisfying existential watch.