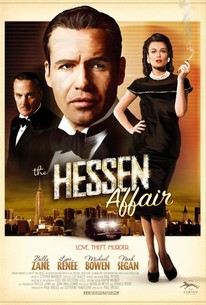 In the immediate aftermath of World War II, two U.S. Army officers stationed in Frankfurt uncover the German Crown Jewels in a castle formerly owned by the royal family. But when the two lovers plot to smuggle the gems back into the U.S., their plans are quickly complicated by military investigations and a vicious mob kingpin. Now, if they can just stay loyal to one another until the heat blows over they'll both be rich beyond their wildest dreams.

John B. Lowe
as Rueben Markel

Will Woytowich
as Chief Warrant Officer
View All

Critic Reviews for The Hessen Affair

There are no critic reviews yet for The Hessen Affair. Keep checking Rotten Tomatoes for updates!

Audience Reviews for The Hessen Affair

Really smooth and adequately stylish classic war crimes flick of a jewelry heist gone sideways. Colonel Jack Durant (Billy Zane) and Lieutenant Kathleen Nash (Lyne Renee) stumble across the crown jewels owned by a German Princess. Running on the idea of the "spoils of war", Durant and Nash takes evasive action to attempt to fence the jewels in (where else!??!?) New York City. Complications arise when the Princess makes claims that the jewels are missing and members of the group that assisted Durant and Nash in the findings...wants their percentage of the sold off jewels. Twisting, turning and relentless action is non stop and full of surprises. Please see this!