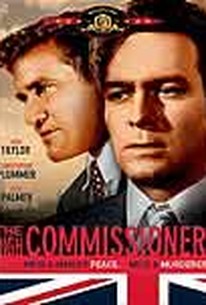 A police investigator is forced to rely on the man he's been instructed to apprehend in this cold war thriller. Sir James Quentin (Christopher Plummer) is a high level negotiator with the British government who is approached by Scobie Malone (Rod Taylor), an Australian detective who has been instructed to arrest Quentin in connection with the murder of his first wife 25 years earlier. Quentin calmly asks Malone if he could wait until he completes his work at a diplomatic conference, and Malone agrees; Quentin even allows Malone to stay at his home with his second wife Shelia (Lilli Palmer). Malone's assignment soon proves to be more complicated (and dangerous) than he expected when he has to save Quentin from an assassination attempt. Quentin must protect a fellow diplomat also targeted by gunmen, and Malone learns that Shelia has a deadly secret. The High Commissioner was also released under the title Nobody Runs Forever. ~ Mark Deming, Rovi

Ken Wayne
as Ferguson
View All

Critic Reviews for The High Commissioner

There are no critic reviews yet for The High Commissioner. Keep checking Rotten Tomatoes for updates!

Audience Reviews for The High Commissioner

There are no featured audience reviews yet. Click the link below to see what others say about The High Commissioner!