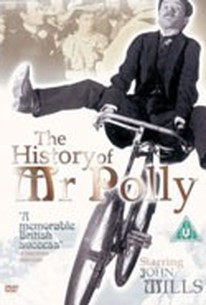 H. G. Wells' non-fantasy efforts have, with the exception of Kipps, proven traditionally difficult to transfer to film. History of Mr. Polly occasionally suffers from too-close fidelity to its Wellsian source; one wishes that adaptor/director Anthony Pelissier could have "opened up" the story a bit more. Still, the film is impeccably cast: particularly good is John Mills as Alfred Polly, whose efforts to make a go in the business world continually come acropper. A humble draper's clerk, Polly is profoundly affected by a variety of personal relationships, most notably with colorful Uncle Jim (Finlay Currie) and his nagging wife Miriam (Betty Ann Davies). Ultimately, he finds happiness in an even humbler pursuit than the drapery business. Star John Mills' daughter Juliet shows up in a very minor role. ~ Hal Erickson, Rovi

Doris Hare
as May Pant

Irene Handl
as Lady on Left

Edie Martin
as Lady on Roof

Critic Reviews for The History of Mr. Polly

H.G. Wells' little shop-keeper... comes perfectly to the screen in the acting of John Mills.

Parts of the movie are engaging, parts lightly amusing, parts awkward, and parts a little dull.

Audience Reviews for The History of Mr. Polly

There are no featured audience reviews yet. Click the link below to see what others say about The History of Mr. Polly!

The History of Mr. Polly Quotes