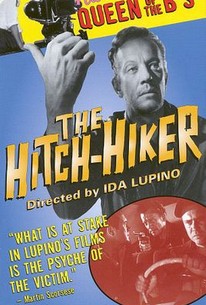 Two men on a fishing trip pick up a psychopathic fugitive with an intense hatred of humanity in this relentlessly suspenseful thriller directed by Ida Lupino and written by Daniel Mainwaring (Invasion of the Body Snatchers). Ray Collins (Edmund O'Brien) and Gilbert Bowen (Frank Lovejoy) are on their way to a relaxing weekend on the lake when they make the fateful mistake of giving a ride to Emmett Myers (William Tallman), a ruthless killer on the run from the cops. As a young child Myers was severely abused, and now he's determined to make the world suffer for the atrocities committed against him. An unrepentant sadist, Myers repeatedly uses his faulty eye (which is permanently open) to trick his two terrified victims into believing they have gained the upper hand in the tense stand-off, only to turn the tables on them at the last second. Inspired by the horrific crimes of real life mass murderer William Cook, who was eventually executed in San Quentin.

Wade Crosby
as Joe the Bartender

Ed Hinton
as Chief of Police

Critic Reviews for The Hitch-hiker

The drama itself is confined to one basic situation: captives at the gunpoint mercy of a trigger-happy killer. But, playing this conflict for all it is worth, the movie works up a good deal of sweaty suspense without using false theatrics.

Don't take any children to see The Hitch-Hiker. And if anyone who sees the film ever picks up hitch-hikers again, he'll deserve what may happen.

With nothing more than three able actors, a car, a lot of rugged scenery, and their own impressive talents as producers, authors and director, Collier Young and Ida Lupino have brewed a grim little chiller called The Hitch-Hiker.

The Hitch-Hiker is a good movie because it does what it sets out to do. Without the handicap of more "message" than story, it performs a public service in alerting drivers to possible dangers of obeying a kindly impulse.

[Filmmakers Ida Lupino and Collier Young] have kept the film down to the taut and simple fundamentals if menace, suspense and chase, and have turned out an effective job, which ought to give any viewer some nervous moments.

Like the man with the gun in The Hitch-Hiker, the man In the theater seat keeps watching for a single false move. And to the credit of all concerned with the tight little thriller [The Hitch-hiker], this spectator never caught one.

Ever-mounting suspense, highlighted by notable acting adds to this grimly realistic plot of a nightmarish journey into Mexico.

That a woman directed this picture is something to consider. Not that I underestimate the potentiality of any woman director. But, this is so definitely a man's story that the results are amazing.

This photoplay, with its high suspense and savage masculine stresses and conflicts, was directed by Ida Lupino. It is a little masterpiece of crime-depiction.

Talman as the murderous fugitive and Loveioy and O'Brien as the imperiled men are in almost every minute of the footage of this generally gripping, but somewhat repetitious film. All three perform excellently.

One of the most entertaining thrillers we have seen in many moons.

Audience Reviews for The Hitch-hiker

Ida Lupino directed this tough little pot-boiler of a thriller about 2 regular guys on a fishing trip who get kidnapped by one psychologically scarred piece of work for a cross-country trip via automobile. Everything's good here, everything, the direction, the acting, the writing ... a great noir.

A pretty good movie, but it could be better, especially now that there have been so many other movies like this one.

Great little Thriller by the only female directors of Hollywood's Golden Age, Ida Lupino. It starts out amazingly and then sort of peters out toward the end, but overall very enjoyable.

Ultimately a bit of a shaggy dog story - but the first hour is tight, unnerving ride through the postwar male American psyche.