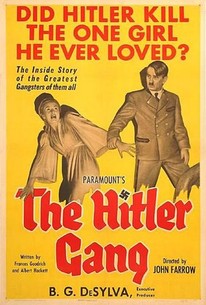 The rise of Adolf Hitler from 1918 to 1934 is chronicled in this fairly accurate historical drama. The story begins as Hitler is hospitalized after suffering shell-shock in WW I. He is then seen founding the National Socialist party and drawing the men who would become his staunch supporters, Himmler, Goering, Hess, Roehm, and Goebbels, into his mad dreams. He is then seen in prison following his Munich beer-hall fiasco. It was while incarcerated, that the little dictator wrote Mein Kampf. Upon his release, Hitler continued to vie for power. By the film's end, he has become Reich chancellor and is attempting to eradicate his opposition.

Critic Reviews for The Hitler Gang

It tells us nothing we don t know.

It is a picture for the theatre of a people at war, but it rises beyond theatricalities.

This historical-like film, though fairly interesting, is a questionable box-office entertainment.

There are no featured reviews for The Hitler Gang at this time.