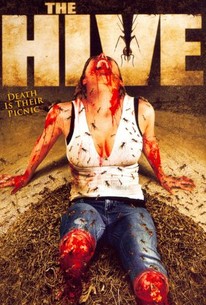 A young scientist and his resourceful band of entomologists feel the fury of Mother Nature firsthand after being summoned to the jungles of Brazil to defeat an army of ants and realizing that these particular insects possess unusual strength and intelligence. The Brazilian jungle is teeming with ravenous predators, none of which are nearly as dangerous as the 200 million flesh-eating ants that are currently devouring anything unfortunate enough to stand in their path. As the fight for the rainforest begins, the army begins to reproduce faster than every before, and as their numbers multiply their appetite for human flesh only grows.

Critic Reviews for The Hive

There are no critic reviews yet for The Hive. Keep checking Rotten Tomatoes for updates!

Audience Reviews for The Hive

The Hive announces itself as a B-Movie to be taken seriously. It starts with a rather disturbing scene in which a mother and her baby are eaten alive. Thankfully, the makers decided not to be too graphic here. We are soon treated to the usual elimination of said threat by a team of experts. These actors are actually rather good and play down their roles to make it easy on themselves. The film gets odder and odder as the ants start creating tentacles, complex computer systems and in a Ratatouille style move, an ant starts controlling a person. Gruesome, fun and moments of originality (even if it is bizarre), you could do a lot worse than this.