The Hobbit: The Desolation of Smaug2013 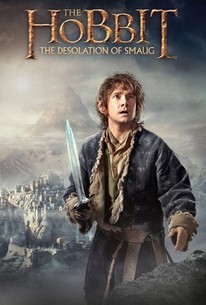 Critics Consensus: While still slightly hamstrung by "middle chapter" narrative problems and its formidable length, The Desolation of Smaug represents a more confident, exciting second chapter for the Hobbit series.

Critics Consensus: While still slightly hamstrung by "middle chapter" narrative problems and its formidable length, The Desolation of Smaug represents a more confident, exciting second chapter for the Hobbit series.

Critic Consensus: While still slightly hamstrung by "middle chapter" narrative problems and its formidable length, The Desolation of Smaug represents a more confident, exciting second chapter for the Hobbit series.

The Hobbit: The Desolation of Smaug Photos

The second in a trilogy of films adapting the enduringly popular masterpiece The Hobbit, by J.R.R. Tolkien, The Hobbit: The Desolation of Smaug continues the adventure of the title character Bilbo Baggins (Martin Freeman) as he journeys with the Wizard Gandalf (Ian McKellan) and thirteen Dwarves, led by Thorin Oakenshield (Richard Armitage) on an epic quest to reclaim the lost Dwarf Kingdom of Erebor.(c) WB

Luke Evans
as Bard the Bowman

Stephen Fry
as Master of Laketown

Critic Reviews for The Hobbit: The Desolation of Smaug

Jackson managed to do something that I never thought was possible--make me care about a Hobbit tale. He also delivered one of the best cliffhangers of the year. Kudos to that.

Nearly everyone in the film is creaking under the weight of the past.

The tale has no emotional resonance, and the thinness of the plot (only five of the book's chapters are adapted here) and the colorless depictions of the leading characters do it no favors.

Now that CGI can conjure up anything, the challenge to film-makers is to increase their inventiveness. Jackson rises effortlessly to that.

A definite improvement on the previous outing, and hopefully a portent of better things to come in There and Back Again.

It does the job that every middle movie should, that is it sets up the climax of the story perfectly.

There's no shortage of story threads, of hard to remember names but Jackson weaves it all together seamlessly - with some "Walking Dead" style battle scenes... lots of arrows in the head - and has made a big handsome movie to get lost in.

The adventure is undoubtedly epic and would likely suffer little from excising excess bits of winding tracking shots through Byzantine structures.

Meanwhile, back in Middle-earth, everyone is displaying worrying symptoms associated with the dreaded plight known as Middle-film Syndrome.

A vast improvement upon its predecessor.

The whimsical and light-hearted approach has gone, replaced by a tonally darker film.

Audience Reviews for The Hobbit: The Desolation of Smaug

Another overly long Hobbit film filled with pointless chase sequences, but the plot does start to develop nicely getting you hooked towards the end where it just abruptly stops in the most annoying cliffhanger ending ever.

The Hobbit: The Desolation of Smaug Quotes