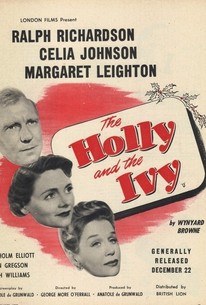 The Holly and the Ivy Photos

Faithfully adapted from a popular holiday play by Wynyard Browne, this moving British drama centers on a recently widowed, aging country vicar who hosts a family Christmas and learns a valuable lesson about keeping his own homefires alight before spending too much time tending the fires of others. Those coming for the holiday include his sister, his late wife's sister, and her cousin. The vicar's free-spirited youngest daughter and his son, a furloughed soldier, also show up. The preacher's eldest daughter lives with him and together they welcome their guests. The vicar is a good man and a caring fellow who spends considerable time caring for and counseling his parishioners, perhaps too much time, for he does not recognize the troubles of his own clan. His devoted oldest daughter quietly deals with a terrible dilemma. She is about to marry an engineer who has just found a long-term job overseas. She wants desperately to be with him, but will not leave her beloved father who seems to need her so much. Her little sister also has trouble. While in the city she fell in love with a soldier. He impregnated her, returned to the war, and was killed. Later the child died and she has become an alcoholic, something she eventually tells her brother and sister. Meanwhile the young people's aunts, learning of the situation, ask the youngest to return home to care for her father so the eldest can marry. Unfortunately, the young woman refuses and heads off to get drunk with her brother. When the vicar learns about his daughter's troubles, he and she have an emotional reconciliation. He then moves on to make peace with the rest of his family.

Roland Culver
as Lord B

Critic Reviews for The Holly and the Ivy

A great cast, including Celia Johnson and Denholm Elliot, add some heft, but the film ultimately feels like a missed opportunity.

Audience Reviews for The Holly and the Ivy

The Holly and the Ivy Quotes