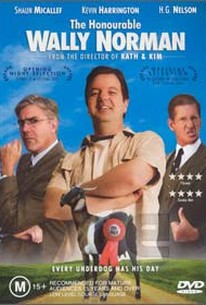 Australian filmmaker Ted Emery directs the fish-out-of-water comedy The Honourable Wally Norman. Kevin Harrington stars as the down-to-earth Wally Norman, a foreman at a meat-packing plant who generally gets along with everyone in the small town of Givens Head. The upcoming election for the county seat involves the conservative Total Country Party member F. Ken Oats (played by comedian Shaun Micallef) and the Australian People's Party member Willy Norman (Alan Cassell). Due to a corrupt government scam, Wally's name appears on the ballot and he is approached to run for Federal Parliament. He decides to run just for the heck of it and brings his entire family along with him. Melissa Madden-Gray plays political reporter Rebecca Jane Thompson and John Singleton appears in a cameo role as the Prime Minister. ~ Andrea LeVasseur, Rovi

Greg Pickhaver
as The Chairman

There are no critic reviews yet for The Honourable Wally Norman. Keep checking Rotten Tomatoes for updates!

There are no featured audience reviews yet. Click the link below to see what others say about The Honourable Wally Norman!