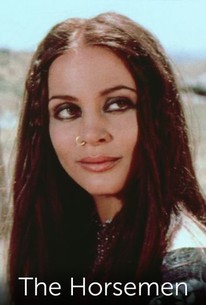 Director John Frankenheimer, extrapolating from his earlier films The Gypsy Moths and Grand Prix, examines machismo and how men test themselves to the limits of endurance in The Horsemen. The film takes place in modern day Afghanistan. Uraz (Omar Sharif), the son of Tursen (Jack Palance), the stable master for a feudal lord, is a master horseman who lives by a primitive code of honor. Uruz's family honor is damaged when he breaks his leg playing the game which is the Afghani equivalent of polo. His father, who lost a lot of money betting on his son, will barely speak to him. To regain the family honor (and wealth) he must somehow re-learn how to ride -- after his injuries cost him his leg below the knee. In the face of great obstacles, and despite the derision and treachery of others, he gains the chance to play in the games given by the king of Afghanistan. The footage of the horsemanship in these dangerous and anarchic games is one of the real highlights of this film.

Eric Pohlmann
as Merchant Of Kandahar

Aziz Resh
as Bacha to Ghulam

Barbara Wain
as Nurse
View All

Critic Reviews for The Horsemen

I refuse to believe that the dreadful Hollywood-archaic screenplay which numbs The Horsemen (Astoria) was entirely the work of Dalton Trumbo as the credits vouchsafe.

The result is curiously stodgy, over-reverent.

For all its overlength, however, it is reasonably beguiling on its [road to] nowhere.

Neither John Frankenheimer's spare, heroic direction nor Claude Renoir's spectacular photography can quite bring this horseman to life.

I have long admired Mr Frankenheimer's talents, but they are overlaid here by local colour (splendid photography by Claude Renoir).

The location shots in Afghanistan (and some in Spain) are off-beat and stunning, and are the best reason to see this film.

There is little balance given to the Afghan people shown here.

The Horsemen takes its rightful place, if gawkily so, among Frankenheimer's best films

There are no featured reviews for The Horsemen at this time.