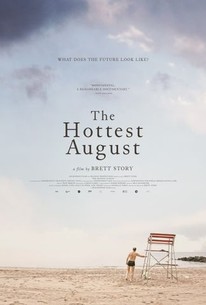 A complex portrait of a city and its inhabitants, The Hottest August gives us a window into the collective consciousness of the present. The film's point of departure is one city over one month: New York City, including its outer boroughs, during August 2017. It's a month heavy with the tension of a new President, growing anxiety over everything from rising rents to marching white nationalists, and unrelenting news of either wildfires or hurricanes on every coast. The film pivots on the question of futurity: what does the future look like from where we are standing? And what if we are not all standing in the same place? The Hottest August offers a mirror onto a society on the verge of catastrophe, registering the anxieties, distractions, and survival strategies that preoccupy ordinary lives.

News & Interviews for The Hottest August

View All The Hottest August News

Critic Reviews for The Hottest August

Story, perhaps better known outside Canada for her stylistically distinctive work, has been compared to Errol Morris, but that's a tad unfair. She's a true original and this film is formidably rich in texture.

August 2017 was not the hottest on record. Not even close. If one can't get the title right, what chance is there of everything else falling into order?

No movie can encompass everything that's on the minds of Americans at the moment, but Story's modest but wide-ranging cine-essay comes closest, constructed in such a way that no two audiences will see it the same way.

But sometimes an experiment feels like just an experiment, and that's where the well-intentioned query "The Hottest August" ultimately lands.

This collection of interactions with ordinary people is a cinematic gift both simple and multilayered, an intellectual challenge and an emotional adventure.

While it never feels completely defeatist, [Story's] film offers scattered snapshots of an uncertain society in its dog days.

A free-flowing and discursive essay about the future which already feels like a postcard from the past.

I can't think of anyone better suited to capture the poetry of our despair.

Is the future controllable, inevitable, or both? Are we preparing for it, or will it eat us whole like the moon ate the sun that August?

The film becomes a sophisticated exercise in science horror. There's an intricate sensory layer to the storytelling that evokes the rainy summer and its flitting breezes, a creeping shadow of the uncanny cast over its beauty.

...far from An Inconvenient Truth, and other activism or information-centric documentaries of its ilk...the subjects in the film are offering their own perspective in words, not in facts and figures.

There are no featured reviews for The Hottest August at this time.