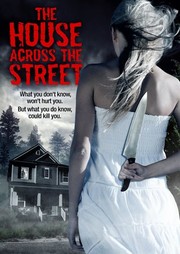 The House Across the Street

The House Across the Street Reviews

Leon B
July 18, 2015
Review:
I really wasn't a fan of this movie because the storyline is really slow and the random events were a bit too sketchy. Its about a troubled woman who moves to a quiet town to try and escape her past. After witnessing a car accident outside her house, she starts to ask questions around the town, which upsets the police and some of the locals. She also sees strange visitors turning up to the house in front, so she puts her investigating hat on, to try and find out more about the strange goings on. Everywhere she turns, she hits a brick wall so she befriends a cop who is also intrigued about the house across the street. After a while, the story starts to make sense but it does take its time getting there. The woman seems to be walking around in a daze through most of the movie and her schizophrenic nature made her character look and feel a bit strange. Personally, I found her acting a bit dull and emotionless, especially when her ex-boyfriend helped her out and she kept on treating him like rubbish for no apparent reason. Anyway, I liked it when it all came together at the end but it was still a bad script and the poor acting didn't help. I also didn't like the way the film was filmed but that just me being picky. In all, it's a total waste of time and money and I can completely understand why the critics gave it the thumbs down. Awful!

Round-Up:
The actress who plays the lead, Jessica Sonneborn, has starred in over 40 movies but they have all been low budget and unheard of. She wrote, directed and starred in Alice D, which I've never heard of and she also starred in Never Open The Door, A Lure: Teen Fight Club and Love Addict. She might be better in those movies but I didn't really rate her in this one. The director, Arthur Luhn, has only directed 6 movies but none of them turned out to be anything big. Anyway, Eric Roberts acts the same in all of his movies so I wasn't that surprised with his input but it's really the lead actress who let this film down. At the end of the day, I really didn't enjoy this film but the twist at the end wasn't bad.

I recommend this movie to people who are into their thrillers about a woman who moves to a strange town and starts to investigate weird episodes which occur in the house in across the street. 2/10

Brian G
½ April 23, 2015
Probably one of the more boring movies I've watched it a long time. I tried hard to give this movie a chance too but nothing much happens. It tries to play on neighbor paranoia and mystery, it's just that it fails.
Page 1 of 1