The House By The Cemetery (Quella villa accanto al cimitero)1981

The House By The Cemetery (Quella villa accanto al cimitero) (1981) 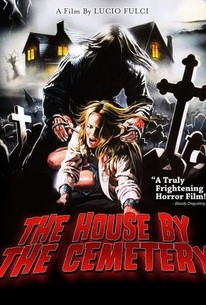 This cult horror film from director Lucio Fulci lurches along with a certain amount of disjunction due to cutting, perhaps, if not to an innate Fulci disposition. When the Boyle family temporarily moves into a mansion near Boston so the father can do some research, the son Bob (Giovanni Frezza) starts seeing the ghost of a young girl motioning to him, and eventually he discovers the basement's terrible secret. A certain Dr. Freudstein (Giovanni de Nari) has been hanging out there since 1879 when he was banned from the medical profession, and he has kept himself alive although in miserable physical shape, by murdering the various inhabitants of the house and using their cells to keep his body going. An oversize bat attacks the father, floors come apart and crush unsuspecting victims, and at one point little Bob's blond head is held to the basement door by the evil doctor while the father is wildly swinging his axe through the door to save his son. Scenes like these and others are the real objective of the movie -- the strange and irresolute ending, and leaps and gaps in the plot, are indications that all else is dispensible pretext - gore is the goal and it is delivered in sickening doses.

Anna Pieroni
as Ann, the babysitter

The House by the Cemetery is a truly unsettling experience whose different parts never quite add up to a coherent whole, and linger in the darkest passageways of the mind.

I had a blast with this horror classic even if it is highly evocative of other isolated scary house movies.

the violence inflicted on the various characters throughout the film (which includes gouging, stabbing, throat ripping, dismemberment, and decapitation) is nothing compared to the violence that Fulci inflicts on storytelling and logic

What's not to love about film that has a haunted house, a mad scientist, a cemetery, flesh-eating cellar-dwelling zombies, an evil imaginary friend, a clueless cavalcade of victims, gore galore, AND an over-the-top vampire bat-bite?

Tedious follow up to Fulci's entertaining ZOMBIE. Features the most annoying kid in the history of cinema.

Someone built another house on top of a graveyard. Dummies!

A family moves into a home with a creature in the basement who pops out every now and then to kill someone. Silly gore, atrocious dubbing, mediocre scares.

Another terrifying Italian shocker from the legendary Lucio Fulci. A family move into a creepy old house and are unaware that living in the cellar is the flesh-eating zombie of a 19th Century surgeon. The little boy is soon a friend with the ghost of the late doctors daughter who warns them to stay away but to little effect. The creature gruesomely kills and dismembers a variety of Estate Agents, Copulating teenagers and Babysitters leading to a terrifying finale in the corpse-strewn cellar. The Lucio Fulci trademark of graphic gore is abundant as ever but it is the atmosphere that makes this movie stand out. Bumps in the night and the ominous crying of children coming from the cellar are just some of the factors that assault and disturb the viewer. This is a truly amazing movie that relies on shock and terror rather than revulsion. The gore just adds to what is already a truly chilling little tale of cannibalism and depravity that will linger in the mind long after you've forgotten about the illogical plot and poor dubbing. One of Fulci's best films. Deserves its cult reputation.

Didn't like this one that much upon first viewing - wasn't use to Italian film at the time - but I eventually came around to enjoying it enough to consider it one of Fulci's best. Creepy and occasionally gory but the cheesy sound effects and annoying music and dubbing do wear on the mind. Still, very good.