The House of Rothschild1934 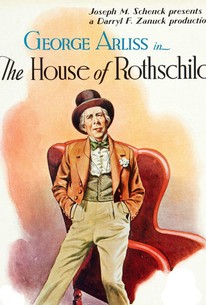 The House of Rothschild Photos

George Arliss plays Nathan Rothschild, the head of a family of celebrated 19th century Jewish bankers. Despite the anti-semitic efforts of a powerful politico (Boris Karloff), Rothschild moves in the best European social circles. He is ultimately knighted for his services to the English crown, which include the financing of the Duke of Wellington's battle against Napoleon at Waterloo. This being a Hollywood picture, the political and financial intrigues have to be offset by romance--in this case the love affair between Rothschild's daughter (Loretta Young) and a handsome military officer (Robert Young). The final scene was photographed in the newly perfected three-strip Technicolor process, though for many years the TV distributors either removed this sequence or reprinted it in black and white. Designed in part as an attack against the burgeoning anti-semitism movement in Hitler's Germany, House of Rothschild was ironically exploited by Nazi functionary Joseph Goebbels, who redubbed and re-edited the film to serve as anti-Jewish propaganda!

Critic Reviews for The House of Rothschild

A picture that is worthy of respectful criticism and one that is entertainment all the way through.

A fine picture on all counts in the acting, writing, and directing.

Not only does Mr. Arliss's work here excel that which he has done in any other picture, but most of the other rôles are acted expertly.

Although as a whole it does not deserve to be classified as a work of art, The House of Rothschild is a very superior piece of craftsmanship.

It is the best picture George Arliss has had for a long time.

An outstanding historical account of the Rothschild financial dynasty during the Napoleonic wars.

Zanuck's lavish production (finale is in three-strip Technicolor) of the Jewish financial empire is largely fictionalized but is more enjoyable due to the good cast of actors, including George Arliss in two roles.

Tells the story of the rise of the Rothschild financial empire.

More successful are the domestic scenes between Nathan and his wife Hannah ... which the film needs if he's going to be a likable character instead of just an admirable one.

Audience Reviews for The House of Rothschild

Who is George Arliss? Talk film with anyone, newbie fan to longtime devotee, and see who mentions him. Nobody. And yet he was something of an auteur in his day, respectable as a bank and better thought of. This is the first thing I've ever seen him in, the kind of thing he was most known for, historical bio-pics. And its an unusual bit too. A film about banking? Are you kidding me? And Jewish bankers no less? In a positive light? Talk about flying in the face of public perceptions! Wake me when it's over, okay? And yet: objective achieved. Because of George Arliss, class, humanity, distinction, purpose, he's the hub from which these qualities flow to and through the whole piece, a benevolent fatherly presence that's believable. I was impressed.

In my opinion this is a hidden gem from the thirties that doesn't get a lot of airplay but probably should. It is one of the first looks at anti-semitism on film and is a great history lesson as well as a great film.

The House of Rothschild Quotes