The Howards of Virginia1940 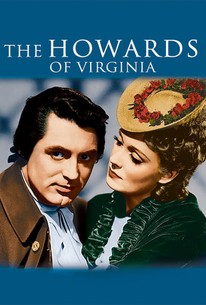 The Howards of Virginia Photos

Hollywood films about the Revolutionary War almost invariably lost money at the box office, and The Howards of Virginia was no exception, despite the presence of Cary Grant in the lead. Most of the story takes place in the colonial capital city of Williamsburg, Virginia, where Matt Howard (Cary Grant) dedicates himself to the causes of Life, Liberty and the Pursuit of Happiness. Remaining faithfully at Matt's side through his early years as a frontiersman and on into his life among the "landed gentry" is his wife Jane Peyton Howard (Martha Scott), the sister of unregenerate royalist Fleetwood Peyton (Cedric Hardwicke). Most of the high points of the Revolution are herein recreated, including the Stamp Act riots, the Boston Tea Party, and Patrick Henry's "Give me Liberty" speech. Curiously, however, director Frank Lloyd stages these scenes in a flat, near-throwaway fashion; even the inflammatory Henry (Richard Gaines) is hampered by unimaginative camera angles. Other historical personages parading through the film include Thomas Jefferson and George Washington, played respectively by Richard Carlson and George Houston. Though it's rather rough sledding in its feature-length version, The Howards of Virginia plays quite well in the half-hour abridgement prepared by Columbia for schoolroom showings.

Critic Reviews for The Howards of Virginia

There are no critic reviews yet for The Howards of Virginia. Keep checking Rotten Tomatoes for updates!

Audience Reviews for The Howards of Virginia

A good cast and handsome production but there wasn't enough of drama to the Revolutionary War they had to throw in a family soap opera too?

This was on very late the other night, so I watched most of it, but I didn't get to see the end, I was too tired. Grant is energetic and sexy in this historic film of a man who is pursuing his dreams in America, and the wife from an aristocratic background that conflicts with his lifestyle. I liked this movie so far, but I really need to see how it ends, I hope they play it again sometime.

The Howards of Virginia Quotes