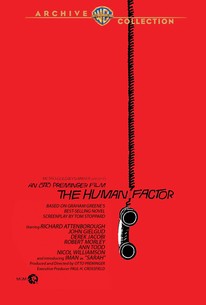 This routine espionage drama is based on a novel by Graham Greene about a low-level British informant who is caught in a trap. Castle (Nicol Williamson) has a desk job in British intelligence. Around him are heavyweights like Col. Daintry (Richard Attenborough), Sir John Hargreaves (Richard Vernon), and Percival (Robert Morley) who will cold-bloodedly stop at nothing to do their jobs as they see fit. And Castle certainly is a nobody compared to them. One day when a friend of his in Africa needs some help, Castle is conned into supplying the Eastern block countries with info on demand. No one suspects him because of his low position, but when his office partner is hauled off, Castle begins to rethink his situation. This was director Otto Preminger's last film. ~ Eleanor Mannikka, Rovi

Frank Williams
as Bellamy
View All

News & Interviews for The Human Factor

Kim Newman on… The “Human” Factor

View All The Human Factor News

Critic Reviews for The Human Factor

This rigorous, compelling, radically stylized film represents the end point in a line of development that Otto Preminger had been pursuing since the late 60s.

The first part is the best aspect of the film. The second seems colder and more mundane. [Full Review in Spanish]

Director Preminger was handed his first project in five years, a great cast, and good material (based on a Graham Greene novel), and he came up with this anemic little thriller.

It remains a well-crafted but rather tedious effort, with only the sparkling performances from its outstanding cast giving the film some spark.

The film is a triumph of missed opportunities, miscasting and misdirection, excused, if at all, by the fact that money ran out and Otto had to hock some paintings to finish it.

Audience Reviews for The Human Factor

Another great film from director Otto Preminger. It takes some time to get into the story, but after a while it becomes intriguing and unpredictable. Great acting, photography and music.