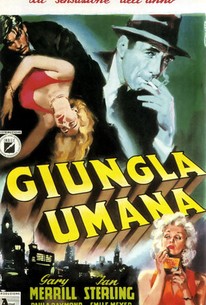 In the tradition of Dragnet and The Lineup, this is devoted to a typically busy day at a police precinct station house. Despite the presence of such recognizable actors as Gary Merrill and Regis Toomey, the film successfully adopts a documentary approach. The plot concerns a new police chief (Gary Merrill) who is determined to clean up a crime-ridden slum district. The ads for The Human Jungle offered teasing full-body shots of costar Jan Sterling in a skimpy negligee; hopefully the fans lured in by this come-on weren't disappointed once they found how little they actually saw of Ms. Sterling (figuratively and literally) in the film itself. The Human Jungle was an "in between" production for Allied Artists, which in 1954 was trying to divest itself of the "poverty row" onus placed upon its predecessor, Monogram Pictures. ~ Hal Erickson, Rovi

Critic Reviews for The Human Jungle

There are no critic reviews yet for The Human Jungle. Keep checking Rotten Tomatoes for updates!

There are no featured reviews for The Human Jungle at this time.