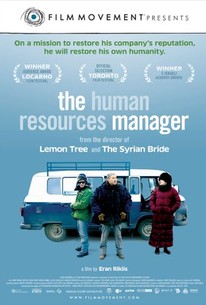 THE HUMAN RESOURCES MANAGER is a dramedy centered on the HR manager of Israel's largest industrial bakery, who sets out to save the reputation of his business and prevent the publication of a defamatory article. It was Israel's official entry for the 2011 Academy Awards Best Foreign Film category. HUMAN RESOURCES MANAGER is a Film Movement release, runs for 103 minutes, is in Hebrew, English and Romanian with English subtitles, and is not yet MPAA-rated. The Human Resources Manager of Jerusalem's largest bakery is in trouble. He is separated from his wife, distanced from his daughter and stuck in a job he hates. When one of his employees, a foreign worker, is killed in a suicide bombing, the bakery is accused of indifference, and the HR Manager is sent to the victim's hometown in Romania to make amends. Far from home, on a mission to honor a woman he didn't even know but has somehow grown to admire, the HR Manager rediscovers his own humanity and his ability to truly care for human resources. Eran Riklis' THE HUMAN RESOURCES MANAGER is based on an Israeli book that was recommended to him-A.B. Yehoshua's A Woman in Jerusalem (a New York Times notable book, and L.A. Times Book Prize winner, among other awards.) Keeping with the book, Riklis made the calculated decision not to name any of his characters (save the deceased woman inspiring the trip) but rather rely on their professions and personal attributes to identify and define them-the HR Manager, The Weasel, The Boy... These character archetypes lack a certain individuality and could, in turn, be any of us. In this act Riklis challenges the conventional and quirky road-trip movie and, in his words, creates a film that is "offbeat and kind of mainstream in a way." He calls THE HUMAN RESOURCES MANAGER "an asymmetrical road movie." It played at numerous international film festivals, including Toronto and Palm Springs, and captured the Audience Award at the Locarno Int'l Film Festival. Riklis' film features fearless performances by a comedic ensemble cast led by the well-known Ukrainian actor Mark Ivanir, whose resumé includes Spielberg's SCHINDLER'S LIST; HOLLY ROLLERS (with Social Network's Jesse Eisenberg), and Robert De Niro's THE GOOD SHEPHERD. -- (C) Film Movement

Guri Alfi
as The Weasel

Noah Silver
as The Boy

Rozina Cambos
as The Consul

Julian Negulesco
as The Vice-Consul

Bogdan Stanoevici
as The Ex-Husband

If director Eran Riklis's intention is to show the blossoming humanity, so to speak, of a human resources manager, the transformation is much too subtle to work.

Even with incidents involving drunken locals, an underground bunker and a decommissioned tank, the film doesn't build the comic momentum of good intentions hurtling downhill in a strange land.

Yehoshua and Riklis are sometimes better at setting things up than following through, but the result suggests a novelistic density.

Ivanir's acting is the key - he portrays the transition without sentimentalizing his character.

It's hard to say if the film is aiming for a political critique of the dynamics of the everydayness of suicide bombings in Israel and the country's poor treatment of its immigrant population, or if that's just the way we read anything "Israel."

The long, long journey that makes up the bulk of the film is bizarrely undramatic.

A sometimes serious, sometimes quirky road movie sees an HR Manager travel from Jerusalem to Romania with a dead body, a collection of strange characters, and a slowly developing conscience about the fate of the dead.

A bittersweet Israeli road movie about the difficulties of putting other people first.

A light drama with some tilts towards droll comedy, The Human Resources Manager is ultimately a very humanist film, offering a commentary on the way modern life has become so regulated and routine.

The Mission of the Human Resources Manager Whatever This is one of the first modern Israeli films I have yet seen, and it didn't give me a good impression. It lacks so many things, like a moment of touch - but nevertheless it isn't all bad, its watchable, and at times funny. This is a black-humor comedy/tragedy about a human resource manager who goes on a mission to bring back the body of a Romanian women who was murdered in Jerusalem. Within his journey he starts seeing the world as a different place. A very simple movie, aesthetically pleasing, but don't be duped by the story line because even though it may seem rather interesting it is not. It is very simple, the dialogue is at times boring, and by the end it doesn't leave you thinking about anything. Therefore, I don't fully recommend this movie,. The acting is fantastic but the overall story is a failure. So I am undicided about how I truly feel about this movie, I don't recommend it, but I won't judge you if you wanna go watch it. The Human Resource Manager: "I am coming home"

The human resources manager(Mark Ivanir) of a bakery in Jerusalem in 2002 is about to leave for the night when the owner(Gila Almagor) tells him about an article that is about to run in the next day's newspaper attacking the bakery, and that he has to work on a rebuttal. The article in question is about a female victim(Galina Ozerner) in a suicide bombing who has been left in the morgue for days with a partial pay stub from the bakery as the only clue to her identity her body. With a little help from his assistant(Reymond Amsalem), he is able to identify her. After talking to the night supervisor, he finds out that she has not been working there for weeks. Still, even after sort of identifying the body, the manager is still blamed by the newspaper for negligence, causing him to accompany the body back to her native Romania with the journalist(Guri Alfi) in tow, hoping to be back in time for his daughter's(Roni Koren) field trip to which he has agreed to be a chaperone. The name of the victim in "The Human Resources Manager" is Yulia. For the record, she is pretty much the only named character in the entire movie, focusing attention entirely on her and the efforts to return her remains to her native Romania.(Calling a character by only his title adds a little sarcasm into the mix which is not a bad idea. But I still think it might be a little cruel to think of the journalist as 'the weasel.') That act shows how responsibility for each other does not end at borders nor at the end of life. In this case, it is only the beginning of a long, strange journey. This is especially important in the broken world of the movie where death and destruction reign and almost everybody is alone, mostly due to divorce.(The exception being the Consul(Rozina Cambos) and Vice-Consul(Julian Negulesco). You have to admit it, they do make a cute couple.) So, in the end while "The Human Resources Manager" may break no new ground, it is still a a worthwhile and bittersweet movie about keeping promises.