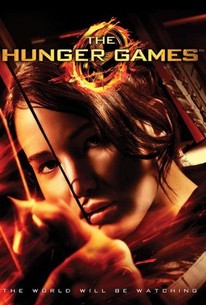 Every year in the ruins of what was once North America, the evil Capitol of the nation of Panem forces each of its twelve districts to send a teenage boy and girl to compete in the Hunger Games. A twisted punishment for a past uprising and an ongoing government intimidation tactic, The Hunger Games are a nationally televised event in which "Tributes" must fight with one another until one survivor remains. Pitted against highly-trained Tributes who have prepared for these Games their entire lives, Katniss is forced to rely upon her sharp instincts as well as the mentorship of drunken former victor Haymitch Abernathy. If she's ever to return home to District 12, Katniss must make impossible choices in the arena that weigh survival against humanity and life against love. -- (C) Lionsgate

Leven Rambin
as Glimmer
View All

Critic Reviews for The Hunger Games

[Rue's] presence gave the heart to the whole movie.

The Hunger Games is undeniably progressive in making its protagonist so plucky, independent, and self-actualizing a young woman.

The film shows precious little hunger and no sense of game.

[Ross'] version of The Hunger Games, while not perfect, is probably as magnificent I ever my wildest dreams could have hoped for it to be.

If you've never read Collins' novels, the odds that you'll enjoy the film are not in your favor.

Lawrence proved her ability to carry a character's heavy burden in Winter's Bone. As Katniss Everdeen, a teenage girl who is both physically and morally strong, she has gravitas, rarely breaking into a smile, but reveals no sign of self-seriousness.

The world and the situation in which Katniss finds herself are ripe with possibilities for deeper commentary, but so many of those possibilities are dissipated as the reader or viewer becomes swept up in the steady piling up of corpses.

Despite its intriguing, albeit recycled plotline, several plaguing elements eat away at the intensity and - perhaps more importantly - the believability.

The Hunger Games isn't a masterpiece, but it is far better than what most likely expected from the film.

The Hunger Games is a fantasy spectacle that energetically takes over your eyes and leaves you hungry for more "games" and its strange dystopian future.. [Full review in Spanish]

It doesn't leave any room for virtuosity and is about as literal and unsurprising a visual realisation of the story as you can get.

Although the casting of a relative unknown like Jennifer Lawrence in the crucial role of Katniss was a bit controversial, in the hindsight of her Oscar win and status as hottest young thing in Hollywood, the choice seems brilliant.

Audience Reviews for The Hunger Games

Okay You guys know me doing reviews, well this is going to be a little different of a review and more of a rant. If you are a fan of this movie or the book thats fine, I personally haven't read the book so I can't say anything about the book badly, but I can about this film. I DESPISED this movie, GOD I F*CKING HATED THIS MOVIE! This film seriously felt like it hurt me in the chest, thats how bad I hated it, and I haven't felt that bad since seeing Vertigo, thats how much I hated first. First the acting. The acting in this film is done so poorly and so bad that I literally could predict every line, every bit of humor, every bit of emotion, so the acting leads little to the imagination and doesn't entertain at all rather annoy. The only actor who was mildly decent was Woody Harrelsons character, but its still a poorly written character along with all the others. Even Donald Sutherland, one of my favorite actors, is given little to work with and is just flat out boring. Along with Josh Hutcherson, I was hoping he would be entertaining like he is in other films like "The Kids are alright" or "Bridge to Terebithia." The main character is also not that interesting, she isn't that interesting, she is boring, and the way she acts is just not entertaining, and she just seems to have no emotion whatsoever even in this film. And there are so many characters that are brushed over that could've been interesting, so when those characters die, there is no sympathy you can show for these characters because of how poorly developed they were in the film, such as the Rue character in the film, you learn that she is watching over Katriss but you know nothing about her so when she dies there is no sympathy you can show to her. You don't know if she was a nice character or a compassionate character to other characters. Also this film suffers from completely despisable characters that are just annoying that get unsatisfying deaths. There is a girl who savors the death of Rue and taunts the main character when holding her down, and you just want to stab her, but no she is shoved into a metal wall and has her neck snapped, and not even in the satisfying way, just the Snap dead, not the flashy kind or satisfying. Next the action This was the only thing that I found somewhat decent, but the action is ruined by one thing, the shaky as hell camera. The camera in this film is almost as bad as the Blair Witch, and those people had a handheld camera, so its expected on why the camera would be shaky, this is a multi-million dollar movie, its the same problem I have with The Bourne Identity movies. The camera shakes massively and it is impossible to tell what is going on when there is a fight scene going on or when someone is being attacked or murdered. Other problems The film really has the problem of not explaining very much. Aside from not developing characters enough, the film has several moments that the dialogue in the film is so predictable, it goes for every single love story blow. It goes for them holding hands when alone, them holding someone up with their hand to save them, to kissing on the head then the mouth, to the dialogue being so damn predictable being every single love movie line ever, "Don't leave stay here" "I won't leave your side" blah blah blah. You wouldn't believe how many times I groaned and sighed when watching this movie. This is seriously all I can say about this film, I can seriously say that this is one of the worst films I've seen hands down. Again if you liked it, thats fine, but Me I can't stand it.

I haven't read the book so I can't compare to that. It's a well made film with a big production and talented cast. Tiny bit surprised at being a 12a rating, it's basically teenagers fighting to the death by killing each other off! Also a theme similar to many films, Running Man, Battle Royal, The Condemned. So not that original but decent enough to check it out.

The dystopic universe could have been better explored, while the shaky camera in the action scenes makes it a bit hard to follow what is actually happening on screen, but still this is an exhilarating movie that benefits a lot from great performances and charismatic characters.

"The Hunger Games" does everything right that the "Twilight Saga" did wrong. It invests you in the characters, makes you feel emotion for every tribute who is on the "good" side, and creates an atmosphere unlike anything you have ever seen. As Katniss's younger sister Primrose is chosen as tribute to compete in the 74th annual Hunger Games, she will not have it. She volunteers herself to compete. The Hunger Games are a battle to the death. 12 districts across the world compete. It is a televised event that happens out of pure chance. Many of the contenders have been trained, while Katniss (Jennifer Lawrence) is forced to rely on her hunting knowledge and coaching instructions. As she meets Peeta (Josh Hutcherson), her feelings for the game change, when she finds out that he is in love with her. 24 contestants are forced into battle, only one comes out alive. In this borderline PG-13 flick, the gore is as high as it needs to be, the acting is brilliant by the entire cast, especially Jennifer Lawrence, who pulls off a powerhouse portrayal of Katniss. Emotion runs on high throughout this film and I was on the edge of my seat the entire way through. It does have it's share of cliche's of course, and those are the few minor faults. The shaky camera felt a little off when you try to focus on the action, the chemistry between Katniss and Gale was a bit rushed, and the conclusion of the film leaves you with so many questions. This film does give you a lot of what you want and It is everything a book adaptation should be. "The Hunger Games" is a great starting point for this series.