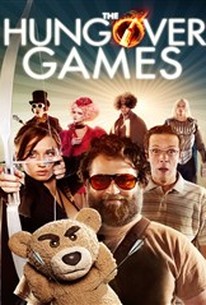 A rowdy wolf-pack heads to Las Vegas for the ultimate bachelor party, but ends up fighting for their lives in a televised competition to the death in this outrageous parody of Teh Hangover and The Hunger Games. Meanwhile, a killer cadre of pop-culture luminaries leaps into the fray as well. Featuring Tara Reid, Jonathan Silverman, Robert Wagner, Jamie Kennedy, and Bruce Jenner. ~ Jason Buchanan, Rovi

Critic Reviews for The Hungover Games

Stolberg doesn't try nearly hard enough, content to get by on the basics of sophomoric behavior and point-and-shout joke construction.

Audience Reviews for The Hungover Games

Admittedly I only lasted 15 minutes into this, but it's exactly what you think it would be. I'm sure it would have its audience, but I'm not one of them. Though in all fairness, I did not like The Hangover and I'm lukewarm on The Hunger Games. If I was a fan, maybe I would be more amused by this. I did watch the Twilight spoof a few years ago and was mildly entertained by it.

With so many dimwitted, half-baked, and often comically inept entries, it's hard to remember when a spoof movie was actually something to be enjoyed. We're beyond the era of Airplane and The Naked Gun, but even some of the early Scary Movie films had some merit, and then Walk Hard, Black Dynamite, and Wet Hot American Summer are shining examples of the best the comedy subgenre has to offer. We've become used to the Friedberg/Seltzer style of spoof, a machine-gun rattle of pop-culture references with no thought given to comedic instruction, just the soon-to-be-dated reference. With all of that established, I could not hate The Hungover Games. It doesn't work well enough to recommend, but the joke-to-laugh ratio is higher than I would have thought, with about every one in five jokes landing, a few had me cracking up. Plus there's actual critical content here, parodying the sources rather than just dull repetition. In the future, the public rises up against Hollywood because we have become sick to death of all their remakes, reboots, and unoriginal crap. And so, the twelve districts of Hollywood genres duke it out for our bloodthirsty entertainment (there's a Johnny Depp district where even they have Depp fatigue). It's a sharp contrast to Friedberg/Seltzer's own inferior spoof, The Starving Games. The pacing is slippery, the content can be questionable, but with lowered expectations, you may be pleasantly surprised, or at least mildly less irritated with the results. The actors onscreen also do credible work, particularly Ben Begley, playing the Ed Helms Hangover role. He has nailed down Helms' speech patterns, mannerisms, and he even looks like Helms. This guy deserves a better movie. With an R-rating, the film is afforded the opportunity to go weirder and dirtier than the lame brained spoofs from Friedberg/Seltzer, like the Gratuitous Nudity district or when they keep reminding us that Katniss is underage. Look, I haven't hit my head all of a sudden; this still isn't a good movie by conventional standards. However, spoof movie standards have gotten so low that The Hungover Games is passable. Again, grading on a curve. Nate's Grade: C

Spoof movies come and go, and there will always be the ones that are great, but as time goes on, this genre of film is what really makes this industry hurt inside and out. The fact that these films continue to make money blows my mind. I just have to accept the fact that these films are not going anywhere. This time around, the plot of "The Hangover" meets "The Hunger Games" and while there are a few jokes that did genuinely make me laugh, they got repetitive and tiring and the film spiralled out of control just like all of these films do. As it begins, you feel hopefully, but the slaps in the face come very rapidly. I do not know why I made myself suffer through this film, but for every bad film, there will always be a good one to look forward to. "The Hungover Games" is exactly what you think it is, nothing more, nothing less.