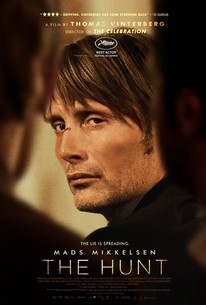 Mads Mikkelsen (NBC's Hannibal, A ROYAL AFFAIR, CASINO ROYALE) won the Best Actor Award at the 2012 Cannes Film Festival for his penetrating portrayal of Lucas, a former school teacher who has been forced to start over having overcome a tough divorce and the loss of his job. Just as things are starting to go his way, his life is shattered when an untruthful remark throws his small community into a collective state of hysteria. As the lie spreads, Lucas is forced to fight a lonely fight for his life and dignity. (c) Magnolia

Alexandra Rapaport
as Nadja
View All

News & Interviews for The Hunt (Jagten)

View All The Hunt (Jagten) News

Critic Reviews for The Hunt (Jagten)

The film continually highlights how easily the seemingly civilised, rational inhabitants of the small town lose their moral bearings - and how irrational their behaviour is.

The acting on all fronts is outstanding, with Mikkelsen holding the centre magnificently as the wronged teacher, his life contaminated by the slow-acting poison of rumour.

The Hunt's inexorability feels derived more from thematic or ideological concerns than any organic necessity.

Vinterberg uses a sharp cinematic knife to cut to the core of the matter: that the human heart can never be entirely civilized and, ultimately, each man is alone with his fate.

Thomas Vinterberg's The Hunt conveys the sinister swirl of persecution more vividly than any film I can remember.

Through it all, we see an idyllic-looking community, where glorious fall colors fade into twinkling December snow - a pretty frame for a terrifying story of a modern-day witch hunt.

It is those themes of communal psychology and the symbolism of loss of innocence that make The Hunt (Jagten) a truly immersive drama. [Full review in Spanish]

The Hunt is not exactly date movie. In fact, unless you enjoy the feeling of simmering in a warm tub smothered with guilt gravy and stewing in awkward juice, things are going to get uncomfortable.

Absorbing yet ultimately forgettable, this gruelling and voyeuristic depiction of an innocent man suffering at the hands of a frenzied mob adds nothing new

There's something disingenuous about the way the drama purposely excludes the normal social frameworks that would necessarily vet what are extremely serious allegations.

...gripping and observant . The Hunt is a hellish private nightmare for a condemned man lost in the confines of chaos, confusion and the contamination of unfounded hysteria.

Audience Reviews for The Hunt (Jagten)

An extremely nerve-wracking thriller with a fantastic Mads Mikkelsen as a man going through a terrifying ordeal. However, it is impossible for me to overlook some major implausibilities, especially the character staying in that town against all good sense and the naive ending.

A teacher is falsely accused of molesting a young girl, his best friend's daughter. The highlight of this film is the tensely controlled performance by Mads Mikkelsen. He is appropriately morally outraged at times, and his face conveys a forced hope of dignity. The film moves slowly and could've probably been about twenty minutes shorter without losing much of its effect. The plot unfolds predictably, but it's Mikkelsen who keeps everything interesting. Overall, this film is strong primarily because of Mikkelsen.

A very scary film. Not because it's in the horror or thriller genre, but because it is a potent reminder of how humans can be bigger monsters than any creature you can invent. In the Danish film "Jagten (The Hunt)" Mads Mikkelsen, who's doing some incredible work on NBC's "Hannibal" is compelling as a man wrongly accused by a young girl of sexual molestation. This likable and responsible adult is viciously ostracized by a town that without reservation believe the accusation. What makes the story even more potent is that the town is filled with former friends and people that have known the main character for his whole life. The accuser is his best friend's young daughter so the difficult situation becomes even more desperate. "The Hunt" is a punch in the gut emotionally but as a film, it is strongly realized and will stay with you for a while.

A phenomenal, unforgettable little film about a kind, loving man (Mads Mikkelsen) who is wrongly accused of pedophilia by one of his students who is in Kindergarten, and how the community goes after him in a mean, violent fashion. Mikklesen, in the performance of the year and the turn of his career, is lights-out in a role that requires a lot from him, namely just convincing the audience that he can pull this character off after playing psychopaths for so many years. He carries the film, and the subject matter is heartbreaking, realistically portrayed, and ultimately very sad. The way the film ends is surprising and fitting given the title of the movie, and Mikkelsen's confused, shaken glare will not leave you quickly. This is a near-masterpiece and one of the finest movies from 2013.