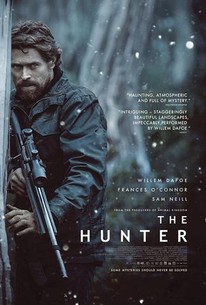 Critics Consensus: The Hunter occasionally suffers from predictability, but Willem Dafoe gives a terrific performance as an obsessive hunter on the trail of a mysterious beast.

Critics Consensus: The Hunter occasionally suffers from predictability, but Willem Dafoe gives a terrific performance as an obsessive hunter on the trail of a mysterious beast.

Critic Consensus: The Hunter occasionally suffers from predictability, but Willem Dafoe gives a terrific performance as an obsessive hunter on the trail of a mysterious beast.

The Hunter is the story of Martin, a skilled and ruthless mercenary sent into the Tasmanian wilderness on a hunt for a tiger believed to be extinct. Hired by an anonymous company that wants the tiger's genetic material, Martin arrives in Tasmania posing as a scientist. He proceeds to set up base camp at a broken-down farmhouse, where he stays with a family whose father has gone missing. Usually a loner, Martin becomes increasingly close to the family; however, as his attachment to the family grows, Martin is led down a path of unforeseen dangers, complicating his deadly mission. -- (C) Official Site

News & Interviews for The Hunter

View All The Hunter News

Critic Reviews for The Hunter

It's a character study, for the most part, allowing the complications and relationships to puncture the narrative only when they have finally penetrated the man.

Its mostly observant temper keeps us from being greatly moved, but it holds us with its acute, almost laboratory dissection of its people's beings.

Dafoe is eminently watchable, and for the most part it's a distinctive, atmospheric movie that cherishes the persistence of mystery.

There's a gripping moral weight to the questions of survival and profiteering the story raises, and the worryingly inexact moment when our interest in endangered species tips over into thoughts of human gain.

You want to say: "Can I have the message in a separate envelope and just spend the film looking at the landscapes?"

Unfocussed and thematically overburdened. More could have been said with less.

The Hunter unfolds at a perfect pace and rests on a really strong script.

Although there are morsels to savour in Daniel Nettheim's nature drama, particularly the location and the cinematography that takes advantage of it, the film never really comes together into a satisfying or cohesive whole.

It gets bogged down in a saccharine subplot that ultimately derails the entire affair.

I loved the pace and performances here, and while by no means flawless, I found The Hunter a good watch.

The Hunter builds hair-trigger suspense in a breathtaking, febrile landscape. All the fine details of tracking and trapping are precisely portrayed.

The ominous and foreboding terrain of Tasmania proves to be the film's greatest asset in an otherwise unsurprising and unchallenging film about a perennially explored subject.

Audience Reviews for The Hunter

A slow, albeit fascinating and beautifully filmed movie for almost 90 minutes. Unfortunately, the solution in the last 15 minutes is so devastatingly saddening (without making much sense), that it's hard to say you enjoyed what you've been watching or feel like revisiting again. Which is sad because the story, chemistry between the characters and the landscape as an alien surrounding works great for the longest time. Especially Dafoe is outstanding as always. Man, if only this ended differently. It pains me to think about it.

An intriguing, though somewhat underdeveloped story of a mercenary hunter (Willem Dafoe) tasked with the mission of finding and killing the last remaining Tasmanian devil in the wilderness of Australia. He also becomes involved with the family he is staying with, whose father has gone missing. There are a lot of interesting elements here, and the ending in particular is powerful and moving, but ultimately this movie is a frustrating concoction of family drama mixed with man vs. nature. The scenes with Dafoe out in the wilderness are fantastic, while his moments with the family seem like a slight distraction from the main meat of the story. Dafoe, as always, is phenomenal and does a lot with his very thinly detailed character, and the cinematography is absolutely breathtaking. In the end though, it just feels slightly underdone, which is a shame because there is a lot of great material here.

Interesting dramatic thriller, The Hunter Starring Willem Dafoe on a search for the last Tasmanian tiger, a species that went extinct in 1936. This is a well acted film, one that boasts an engaging story, and effective direction to keep you involved. I love Dafoe's work, and he gives a terrific performance here. With that being said, The Hunter at times is a bit slow, but it does keep you involved because of its premise. I enjoyed the film for the sheer story alone, and I am familiar with the Tasmanian Tiger or Thylacine and a film based on trying to find the last one is interesting, even if its fiction, it's still a worthy and interesting idea for a film. If you enjoy Dafoe's films, you might enjoy this one as well. It may not be for everyone, but there are plenty of good elements here to make for a truly thriller adventure film that is sure to entertain anyone who enjoys these types of films. What makes this such a thrilling experience to watch is that director Daniel Nettheim uses dark atmosphere to tell this story, add to that the subtle dramatic elements and you have a well crafted picture that has some great performances provided by two accomplished actors. I enjoy films like these because it really jogs your imagination, and keeps you guessing right up until the end. The film is never boring, and everything presented on-screen works well because of a well written script and a truly interesting idea. Add to that a riveting, memorable performance by Dafoe, which is one of his finest in many years and you have a thriller that is gripping from the first frame right up to the climax.