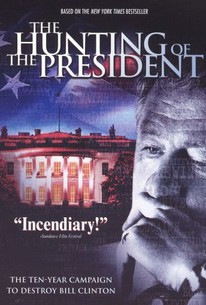 Critics Consensus: Though this doc has an obvious partisan bias, it presents a compelling case.

Critics Consensus: Though this doc has an obvious partisan bias, it presents a compelling case.

Critic Consensus: Though this doc has an obvious partisan bias, it presents a compelling case.

The Hunting of the President Photos

From the best-selling book by journalists Gene Lyons and Joe Conason comes The Hunting of the President, a documentary by filmmakers Harry Thomason and Nickolas Perry. Going back to Bill Clinton's time as Governor of Arkansas and tracing through his impeachment while President of the United States, the Morgan Freeman-narrated film attempts to shed light on the alleged organized campaign to topple the charismatic statesman. Along the way, Thomason and Perry attempt to explore on a more general level the effect and influence of the media and slander-machines on contemporary politics. Interviews with such contrasting figures as James Carville and Jerry Falwell are included alongside never-before-seen Clinton-era footage. The Hunting of the President premiered at a special screening during the 2004 Sundance Film Festival.

Critic Reviews for The Hunting of the President

This is brilliantly persuasive film-making, assembling vivid first-hand testimonies and contemporary accounts with a concision that makes light of the story's complexities.

For a movie that desperately wants to be jazzy and light on its feet, it's sadly heavy-handed.

What comes across most strongly is how utterly trivial so much of this story now seems. Can we really have spent all that time, money and energy chewing over a land deal and worrying about a presidential dalliance?

Marred by juvenile editing tricks and a relentless advocacy tone on behalf of Clinton, the film is like a scent of incense that takes you back in time, but leaves out meaning or context.

Offers a lesson for both parties about what can happen when powerful forces unite to bring down a politician.

One doesn't have to like Bill or Hillary Clinton ... to conclude that the enemies of the president were overzealous.

Galling to the abused outrage assimilator.

A good primer for anyone not familiar with the whole complicated Whitewater investigation.

It's presented well and doesn't feature anything like Moore's increasingly off-putting brand of sarcastic humor.

Makes a highly compelling case for the sheer amount of energy that went into trying to bring down Clinton by any means necessary, be it a shady land deal or a stained blue dress.

Audience Reviews for The Hunting of the President

An interesting documentary about the Republican smear campaign that started before Clinton took the oath, and culminated in his impeachment (although with anything this one-sided, you have to take everything with a grain of salt). But, its somewhat ruined by constantly cutting to old film clips that are supposed to humorously parallel what the interviewees are saying, as if they felt their target audience couldn't sit still for a straight documentary about politics. I guess its the post-Moore style now.

The Hunting of the President Quotes