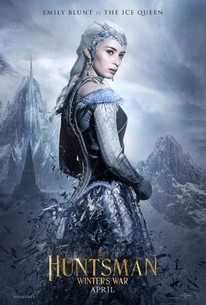 Critics Consensus: The Huntsman: Winter's War is visually arresting and boasts a stellar cast, but neither are enough to recommend this entirely unnecessary sequel.

Critics Consensus: The Huntsman: Winter's War is visually arresting and boasts a stellar cast, but neither are enough to recommend this entirely unnecessary sequel.

Critic Consensus: The Huntsman: Winter's War is visually arresting and boasts a stellar cast, but neither are enough to recommend this entirely unnecessary sequel.

Freya the Ice Queen (Emily Blunt) brings her sister Ravenna (Charlize Theron) back to life, and the powerful evil siblings plan to conquer the Enchanted Forest. Only the Huntsman (Chris Hemsworth) and his secret lover Sara (Jessica Chastain) can stop them in this sequel continuing the inventive twist on the Snow White fable.

Chris Hemsworth
as The Huntsman, ?owca

Colin Morgan
as Duke of Blackwood

Maya Wasowicz
as Woman on Cart

Zoe McLane
as Lady in Waiting

How Family-Friendly are Southside With You and The Hollars?
On DVD This Week: The Huntsman: Winter’s War, Roots, The Nice Guys, and More
Box Office: Captain America Still #1 Surging Past $900M

Even filled with flaws and missteps aplenty, I got a serious kick out of this sequel, I enjoyed it far more than I imagined I was going to.

The heavily female-centered The Huntsman: Winter's War boasts beautiful visual effects and a sense of humor sorely lacking from the original.

When people gripe about Hollywood's reliance on sequels and cheap franchise cash-ins, this is the kind of movie they mean: no Grimm's Fairy Tale, but a grim tale nonetheless.

By cramming far too much material into 114 minutes, The Huntsman: Winter's War feels rushed and incomplete.

It's certainly a beautiful dud. It's a well-acted dud. But a dud it is, and when it lands, that landing is as heavy as a big, fat, icy snowball.

The script lifts so much plot from Disney's animated Frozen that it could qualify as a remake. No one sings "Let It Go," but my advice to audiences is to do just that.

As before, Theron dominates the proceedings; unfortunately, she has about as much screen time as the Jawas in Star Wars.

Drones on for almost two hours until the narrator closes the movie with something to the effect of the story may be over "but fairy talks never end." That doesn't seem so much like an ending as it does a threat that they might make a sequel to this mess.

In a livelier film with more invested performers, this could be a nicely subversive touch, but the viewer can hardly be blamed...

The story is so commonplace and derivative of other popular fairy tales that it is absolutely not a new telling of anything at all.

Mike Massie
Gone With The Twins
View All Critic Reviews (220)

Rather decent mix of a prequel and sequel to the recent Snow white fantasy adventure. This is more of the same, an evil ruler, fantasy creatures, action, some humor (mostly thanks to dwarves). Nothing groundbreaking but pretty entertaining and well done. The film even manages to take a few rather unexpected turns before we reach the inevitable but pretty sweet happily ever after..

Entertaining, but slowly paced. There are plenty of references to Disney's Snow White story, but if you're expecting a Disney flick, you'll be disappointed. This is more of an action/adventure film (although surprisingly spare with the action and adventure). It's really not for kids. Great special effects and nice costumes dress up a somewhat formulaic script. Hemsworth is likable with a facile but puzzling Scottish brogue (I'm guessing it's Scottish -- there's no reason I could discern for any accent whatsoever). But great actresses are really the source of gravity in this film. Watch this film for the women -- not for the titular character, and you'll feel you got your money's worth.

"Homaging" Disney's Frozen like crazy, this fantasy isn't epic (although it likes to pretend that it is) but nonetheless serviceable. The actors do their part to support a heavily CGI-ed story engine, and that they do quite competently. Remind yourself that it's only a movie and you'll be fine. And it's got Emily Blunt. What? You don't like Emily Blunt? I only was unhappy with the evils monkeys in the forest bit, which was both obvious and over-the-line.

In this prequel/sequel to "Snow White and the Huntsman," which was extremely unwarranted to begin with, we get the origin of Chris Hemsworth's Huntsman, and what a bore it is. Now granted, I really enjoyed watching the first instalment and the raw take on the classic tale, but not including the character of Snow White (even though Kristen Stewarts performance was nothing special) felt felt strange for this particular continuation. Sure the first film is riddled with plot holes and missteps, but at least it was equally exciting and emotional when it needed to be. This film plays out more like a very slow-burn romance with a few action scenes that are pretty average. That does not scream box office success to me, but we shall see. Minor Spoilers Ahead (If you have seen the trailers it is not): "The Huntsman: Winter's War" follows Eric (The Huntsman) after losing the love of his life, only to gain her back later in the film with a dumb explanation. That aspect hurt the film for me, even though the best aspect is arguably the romantic arc between Sara and Eric. Jessica Chastain and Chris Hemsworth share very solid on-screen chemistry, making each scene they are in together very enjoyable. Sadly, this is these are the only worthwhile portions of the film. Emily Blunt plays the sister of Ravenna (Freya), and even though I love Emily Blunt as an actress, she really slips in this performance. Her and Charlize Theron seem to be mailing in their performances for a nice paycheque, because every scene seems to be bogged down by over-acting when they are present. The action is well-choreographed and the special effects work in the context of the film, but in the end, it is just another Hollywood product. The predecessor brought in just over 396 million dollars at the worldwide box office on a 170 million dollar budget. These numbers are not an extraordinary success by the standards set by most Hollywood pictures, so why this film warranted a sequel is beyond me. There are many other average films that deserve sequels in order to be improved upon, but instead they decided to milk a story that had already been milked far too many times. Once again, the standout is Chris Hemsworth and his witty performance. He seems to have fun playing this part, which makes for some very funny comedy between him and the dwarves. Those scenes (along with the scenes featuring Jesscia Chastain) are very fun to watch. That is where the fun ends however. By the climax of the film, characters come out of nowhere, motivations are all jumbled, and sequels are set-up for no reason. This film has far too many twists to really care about the fate of any of the characters, and by the time the credits rolled, I felt myself more than ready to leave this world for good. "The Huntsman: Winter's War" is one of the most boring films I have seen in all of 2016 so far. At nearly two hours, this film could have easily been trimmed down to a mere 90 minutes. There is far too much excess to extend it's unnecessarily long running time. There is a lot of good hidden in this mess of a film, but it is not enough to warrant a recommendation. You may have a bit of fun if you were a fan of the first (like I did), but it is ultimately one big disappointing bore, even for those fans. Forgettable to say the least.