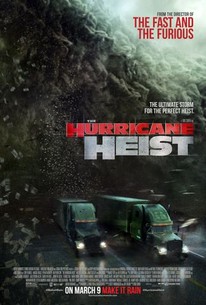 Critics Consensus: The Hurricane Heist is a throwback to the overblown action thrillers of yesteryear -- and a thoroughly middling example of why they don't make 'em like this anymore.

Critics Consensus: The Hurricane Heist is a throwback to the overblown action thrillers of yesteryear -- and a thoroughly middling example of why they don't make 'em like this anymore.

Critic Consensus: The Hurricane Heist is a throwback to the overblown action thrillers of yesteryear -- and a thoroughly middling example of why they don't make 'em like this anymore.

Under the threat of a hurricane, opportunistic criminals infiltrate a US Mint facility to steal $600 million for the ultimate heist. When the hurricane blows up into a lethal CATEGORY 5 storm and their well-made plans go awry, they find themselves needing a vault code known only by one Treasury Agent (Maggie Grace), a need that turns murderous. But the Treasury agent has picked up an unlikely ally, a meteorologist (Toby Kebbell) terrified of hurricanes but determined to save his estranged brother kidnapped by the thieves. He uses his knowledge of the storm as a weapon to win in this non-stop action thriller ride charged with adrenaline throughout.

Toby Kebbell
as Will

Critic Reviews for The Hurricane Heist

Rob Cohen [...] can surely do better than the terrible CGI, unconvincing tax-break landscapes [...], and wince-making dialogue [...] on display here.

All entirely but watchably absurd, and Kebbell himself carries it off with some style and shows he's got exactly the right leading-man chops.

Unforgivably more boring than bad, this has characters, dialogue and music of a quality that would come free with a make-your-own-action-movie kit, while the special effects are anything but.

It's like the filmmakers went into the Die Hard Store, stretched out their arms, rolled their eyes back, and bellowed, "Give me eeevvveeeerryything!"

The dopiest weather-related yarn this side of Geostorm.

The cheapness is neither enraging or endearing, and the film as a whole is just an eyesore that, if anything, lessens the blow of whatever absurdity occurs from time to time.

This movie was so much fun.

It's exactly the kind of bad movie I love.

The Hurricane Heist is one of those films that saw other crazy actions films (...) and said "hold my beer" before throwing a bunch of non-sense at a wall and keep everything that sticks and then some.

This good-bad movie is part of a select group of feature films that limit our neural activity for a couple of hours while we indulge in the most basic and mundane guilty pleasures. [Full Review in Spanish]

Audience Reviews for The Hurricane Heist

Die Hard meets Twister in the new thriller, The Hurricane Heist. When I first heard about this film, I was really excited and hoping for something new, but the truth was this film was nothing more than a compilation. A severe hurricane is about to hit the Gulf Coast, and U.S. agents are in town to secure the U.S. mint. As the storm bares down they are confronted by a gang of thieves intent on taking millions. The only things between them and freedom are a lone agent, two local boys, and one hell of a storm. There were so many parallels to other films that throughout The Hurricane Heist I was getting nothing but deja vu. At some points I felt like they should have just made the hurricane a series of tornadoes and called the film Twister 2. That was bad enough, but when you combine lack of originality with predictable behavior, you get a story that is very dull. What saves the film from being just another disaster movie are some amazing chase sequences, from the minds behind The Fast & The Furious, as well as some incredible special effects. This film is definitely an adrenaline rush, but the story, star power, and originality are severely lacking. I was expecting a daring robbery in the midst of a cataclysmic storm, instead I got Hard Rain, without the star power. In the end, The Hurricane Heist wasn't a terrible film to watch, but it was anything but memorable.

This movie has a great title but falls short in all areas. it wants to be fast and the furious but it never really manages it. fun enough if you have nothing more to watch but there are better heist films out there.

Hurricane Heist is a typical guns-and-robbers film that is surprisingly entertaining even though the plot is rather ludicrous. Formulaic, and works. But forgettable.