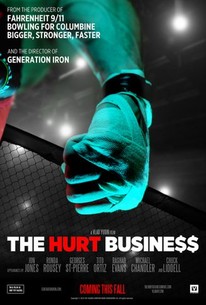 From the producers of 'Bowling for Columbine', 'Fahrenheit 9/11' and 'Generation Iron', 'The Hurt Business' details the lives of various martial arts superstars, including Ronda Rousey and Jon Jones, competing in one of the fastest growing sports in the world and the struggles and triumphs that accompany all careers in cage fighting. Besides featuring legends, such as Georges St-Pierre, and up-and-comers in the sport the film covers the history of mixed martial arts fighting, from the coliseums of ancient Greece to modern day venues such as the MGM Grand in Las Vegas, all expertly narrated by Kevin Costner. Themes of injury both mental and physical are explored and the question is raised is it worth it to sacrifice one's mind and body for sport?

Critic Reviews for The Hurt Business

For the sport's fans only, though few will learn much from it.

Both well researched and tightly constructed, The Hurt Business is a refreshingly comprehensive, demystifying documentary look at the sport of mixed martial arts (MMA).

Everything you ever wanted to know about the fastest growing spectator sport with fighters who despite the violence of their craft are smart, articulate and likable. Highly recommended.

Audience Reviews for The Hurt Business

There are no featured audience reviews yet. Click the link below to see what others say about The Hurt Business!