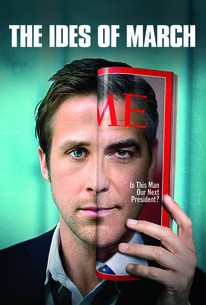 Critics Consensus: While not exactly exposing revelatory truths, The Ides of March is supremely well-acted drama that moves at a measured, confident clip.

Critics Consensus: While not exactly exposing revelatory truths, The Ides of March is supremely well-acted drama that moves at a measured, confident clip.

Critic Consensus: While not exactly exposing revelatory truths, The Ides of March is supremely well-acted drama that moves at a measured, confident clip.

The Ides of March Photos

The Ides of March takes place during the frantic last days before a heavily contested Ohio presidential primary, when an up-and-coming campaign press secretary (Ryan Gosling) finds himself involved in a political scandal that threatens to upend his candidate's shot at the presidency. -- (C) Sony Pictures

Rob Braun
as Himself

Rachel Maddow
as Herself

Joe Dinda
as Joe the Staffer

News & Interviews for The Ides of March

View All The Ides of March News

Critic Reviews for The Ides of March

Real shame about the ending, but the rest of the movie is just marvelous.

While the eventual awful revelations might shock liberals who believe the absurdly sunny West Wing to be a documentary, anybody with a shard of cynicism in their heart will react with an unsurprised shrug.

It has disdain for the process, showing the inherent hypocrisy living inside the political system and the corruptive influence it can have on the lives and mores of seeming innocents caught up within its withering whirlpools of self-aggrandizement.

A marvellously stable thriller that squeezes you so expertly you react in all the ways it wants.

You could set your watch by The Ides of March, George Clooney's sleek potboiler about soured idealism, spin and dirty secrets.

This is the film that fans of TV's House of Cards and The Good Wife, or the Joan Allen-starrer The Contender, should lap up.

The Ides of March may feature a lot of inside baseball and appeal to political junkies but this film is more than that.

[It] takes a view of the political process that is closer to the dark cynicism of House of Cards than the rosy optimism of The West Wing. The writing isn't as clever or witty as either of those, but a powerhouse cast makes the most of every line.

The most challenging aspect of watching The Ides of March may very well be that it all feels too frighteningly real.

There are a lot of conventionally-shot people talking in rooms - the most ambitious image lies on the poster.

Audience Reviews for The Ides of March

Clooney proves again that he knows how to direct intelligent films that rely on a great dialogue, and this intriguing character study is gripping from the first scene to the last, centered on a brilliant political battle and with an intense performance by the always fantastic Ryan Gosling.

The press secretary and true believer of an up and coming presidential candidate uncovers a scandal leaving him with a moral dilemma that could potentially destroy this political golden boy's career. Based upon a play by Beau Willimon who was responsible for the American adaptation of the classic political drama House Of Cards, The Ides Of March has all of the kinds of cynical intrigue you'd expect of Frank Underwood's creator. The story is not quite as black-hearted as the TV series but the representation of modern politics being the product of back room deals, manipulation and blackmail certainly retains its flavour. Solid writing and a cast to die for make for a smart, savvy drama but at the same time The Ides Of March does leave you with the feeling that you walked in half way through the story; there's a certain sense of context that is missing and the lack of a weighty, focal message makes it seem a little soapy. But thanks to the talent involved it feels like a piece of intelligent, quality entertainment that fans of both House Of Cards and The West Wing will not fail to appreciate.

The profession of politics is a tawdry, sordid affair; the practice of which can warp one's morals and corrupt one's soul. There, I've said it. But the art of filmmaking is not so much about what is being said, but how you say it. In "Ides of March" we get an adaptation of a stage play that comes alive with a brilliant script, wonderful, tight direction, and solid performances across the board from the likes of Evan Rachel Wood, Melisa Tomei, Phillip Seymore Hoffman, Paul Giamatti, and in particular Ryan Gosling. Of course we have to thank the co-writer of the screenplay, and the director - both embodied by George Clooney, who also steps from behind the lens and gives a terrific performance as the "perfect" candidate... I heard that Clooney was also the caterer for the project! (well, it only seems that way). Amidst the standard plot involving a presidential race, we have Machiavellian mechinations and some snappy dialog wherein not a single character gives a straight answer to anything - holding truth (or their version of it) as power. As I previously stated, it's all in how you say it: take for example the fine scene where candidate Clooney is saying grand ideological things in front of a receptive audience, while backstage, seemingly smothered by a wall sized projection of the US flag, Hoffman and Gosling discuss the back room bargaining required to get their candidate elected. So much for idealism. Late in the film the head of the Democratic party proclaims that he doesn't understand God's plan - of course he doesn't have the perspective of the true insiders who shape and twist fact and fiction to achieve their desired goal... from the campaign manager's point of view, God's plan is all too obvious and the morality... win at all costs as long as you believe in the cause. A nice sentiment and a convincing fairy tale to tell yourself as you sell your soul down the river. The script also takes a nice side step in turning the vitriol onto the populace as well as on the politicians. At one point Gosling puts it all in perspective by drawling "You want to be president? You can start a war, you can lie, you can cheat, you can bankrupt the country... but you can't fuck the interns. They'll get you for that". Shades of Monica Lewinski......and it makes you wonder - how taking bribes can be condoned (see Lobbyist in the dictionary), and yet the populace takes the moral high ground when it comes to hanky panky... somehow, as usual, we miss the bigger picture. Sure, the film doesn't tell us anything an astute person doesn't already know; however, as I earlier stated, it's not the story, but the telling. I'm not revealing hardly any plot points at all here, for I wish for you to experience this all for yourself and then reflect how seamlessly it all fits together into a concise, intelligent narrative.

The Ides of March Quotes