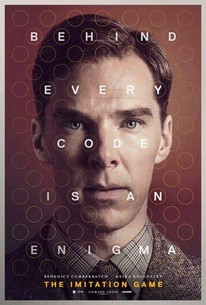 Critics Consensus: With an outstanding starring performance from Benedict Cumberbatch illuminating its fact-based story, The Imitation Game serves as an eminently well-made entry in the "prestige biopic" genre.

Critics Consensus: With an outstanding starring performance from Benedict Cumberbatch illuminating its fact-based story, The Imitation Game serves as an eminently well-made entry in the "prestige biopic" genre.

Critic Consensus: With an outstanding starring performance from Benedict Cumberbatch illuminating its fact-based story, The Imitation Game serves as an eminently well-made entry in the "prestige biopic" genre.

During the winter of 1952, British authorities entered the home of mathematician, cryptanalyst and war hero Alan Turing (Benedict Cumberbatch) to investigate a reported burglary. They instead ended up arresting Turing himself on charges of 'gross indecency', an accusation that would lead to his devastating conviction for the criminal offense of homosexuality - little did officials know, they were actually incriminating the pioneer of modern-day computing. Famously leading a motley group of scholars, linguists, chess champions and intelligence officers, he was credited with cracking the so-called unbreakable codes of Germany's World War II Enigma machine. An intense and haunting portrayal of a brilliant, complicated man, THE IMITATION GAME follows a genius who under nail-biting pressure helped to shorten the war and, in turn, save thousands of lives. (c) Weinstein

Critic Reviews for The Imitation Game

Cumberbatch helps elevate what could've been a rote boilerplate biopic into a film with the spark of a live wire.

A moving tribute to an extraordinary man.

What could have been a very dry and earnest film emerges, under the intelligent direction of Norwegian Morten Tyldum working from a screenplay by Graham Moore, as a gripping and still rather extraordinary story.

The "action" here is Turing tinkering with his machine. Or simply thinking -- which, as Cumberbatch portrays it, is adventure of the highest order.

We go into a movie knowing that the subject was as genius or a hero, a martyr or titan. We should leave with a more nuanced understanding of who he was, his complexities and flaws.

For the filmmakers, there are simplifications that must have been inevitable, for dramatic and narrative purposes, when it comes to depicting the years of wartime work. But what of the other choices that have been made?

With its focus on the internal struggle as significant as the code-breaking itself, it sets it apart from its Bletchley Park predecessor, the decidedly wet Enigma.

The film deserves credit for pointing viewers in the direction of such a compelling individual and historical drama.

Supporting cast and period production values are top notch, but it's Cumberbatch who excels, peeling back the layers of Turing's enigmatic life.

Unfortunately, the film suffers from a weak script that fails to properly educate the audience about Turing...and it also downplays Turing's homosexuality.

Manages a surmounting level of intrigue from both its deft performances and its shuffling narrative of past, present, and post-war events.

The accolades bestowed on this otherwise well mounted but incredibly milquetoast production is the political statement that the film simply does not have the courage to muster on its own.

Audience Reviews for The Imitation Game

Benedict Cumberbatch swings for the fences in this mere thumbnail sketch about the pressures surrounding the Brit professor guy who was primarily instrumental in breaking the secret Nazi war codes during WW2. Oh ... AND HE WAS GAY (!!!!!), and that's what this film is really about, his successes despite some considerable persecution. So its a message film, yes, but with high production values.

I don't know how closely the movie follows real life, but this movie is like Alan Turing himself - a mix of intelligence, oddness, humour, despair, etc.

I didn't know anything about this. I had no idea it was a true story, and I didn't expect it to be so sad either. Really well made movie and both Benedict and Keira were excellent here. Enjoyed it a lot more than I expected to. This could so easily been a dull but worthy.