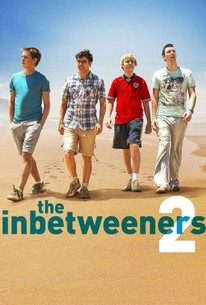 Critics Consensus: The hapless Inbetweeners reunite for another raunchy adventure that will satisfy fans' appetite for laughs, but a downturn in plausibility along with an uptick in mean-spiritedness makes for less fun than their previous exploits.

Critics Consensus: The hapless Inbetweeners reunite for another raunchy adventure that will satisfy fans' appetite for laughs, but a downturn in plausibility along with an uptick in mean-spiritedness makes for less fun than their previous exploits.

Critic Consensus: The hapless Inbetweeners reunite for another raunchy adventure that will satisfy fans' appetite for laughs, but a downturn in plausibility along with an uptick in mean-spiritedness makes for less fun than their previous exploits.

Neil, Simon, and Will join Jay on his gap year in Australia.

Simon Bird
as Will McKenzie

News & Interviews for The Inbetweeners Movie 2

View All The Inbetweeners Movie 2 News

Critic Reviews for The Inbetweeners Movie 2

The dialogue is relentlessly fast but never funny, unless you consider four-letter words funny in themselves.

The focus remains firmly on the delusional quartet, confidently drawn and depicted. Things fall away around them, however: the supporting characters are less deftly written, and the female characters are particularly disposable.

The fact is, if you are a fan of The Inbetweeners, as I am, you will like this, as it's more of the same, and if you're not, then you simply won't.

'The Inbetweeners 2' is riddled with contempt: for its characters, for its audience and most notably for the entire female gender.

The comedy works by a process of attrition. When one gag fails, another follows it until, eventually, the film hits the funny bone.

This British comedy sequel is a rare thing in that it's a TV sitcom that's been turned into a movie and actually worked.

We've all made prats out of ourselves, but The Inbetweeners turn it into a laugh out loud art form. Sit tight and you'll be rewarded.

After a strong start The Inbetweeners 2 adds tasteless animal abuse and rape jokes to the mix.

The perpetual straddling of the line of poor taste feels less a challenging of the audience's risqué threshold and more a slightly desperate attempt to gain cheap kudos.

Passingly amusing, adequately performed and fast-paced enough to hold anyone's attention, yes, but The Inbetweeners 2 also proves that there's an endpoint to every franchise.

I loved the fact that the film which is masterfully written and directed by the series' creators, Damon Beesley and Iain Morris is merciless in its attack on Trustafarians who travel the globe with guitars on daddy's money, while claiming to be spiritual.

Audience Reviews for The Inbetweeners Movie 2

Pointless sequel to a movie test should have been left alone. Loved the series, but these movies aren't so great.

An unsubtle, amusing, if not slightly disturbing comedy.

So after the somewhat mediocre affair of the first film the boys are back for more vulgar adventures, this time down under. That's pretty much my whole synopsis right there, this film is virtually the same spiel as the first film but set in Australia, game over. The film follows on from the last movie with Simon having relationship issues with the girl he met in Malia and Will doesn't seem to be with the nice blonde he met in Malia anymore. Neil has also moved on from his girl but Jay has run off to Oz to find the chubby bird he also met in Malia. So most of what happened in the last movie has been jettisoned for a clean slate and basically the story revolves around Jay going after his bird from the first movie. No sooner have the guys met up in Oz and discovered Jay is actually working in a nightclub toilet (nicely done), Will bumps into an old flame and all four are dragged off up the eastern coast to Bryon Bay following her. After a slow start the story does pick up a bit when we meet Jay's uncle in Australia, I can't deny the obligatory stereotypical beer swilling racist foul mouthed Aussie is a hoot if somewhat predictable with the verbal gags. From there on the movie does nail each and every stereotype perfectly from the guitar playing, bead wearing, bracelet adorned, backpacking UK hippies with their silly head wear and earrings. I guess its no surprise the whole film is one big predictable cliche, we all know that right, we know to expect that but does this make for a fun flick? In all honesty no it doesn't, I still can't quite work out how or why this film has done so well here in the UK, well I know why...its because the TV show was so popular and it has a huge following that's why. I must declare I found myself second guessing almost every scene, every line of dialog and every gag, the whole scenario, the whole setup...everything was just so formulaic and predictable it really felt quite lame dare I say. Sure there are scenes and lines that made me laugh of course. The most horrendous of these must be the lumps of poo shooting down the water chute after Neil has an accident at the top. This wasn't exactly funny...more utterly disgusting as the lumps of poo did look very real and the fact they hit Simon in the face followed by him gushing vomit did leave me actually gagging. Seeing Jay wanking under the covers as Will comes close to getting laid was very amusing, the lads getting stranded in the outback brings up some good lines despite the fact you knew right from the start that whole scenario was [b]bound[/b] to happen and Will having a spiritual campfire moment (and outburst) with the hippies was quite good. I did find myself enjoying this in places but generally it all felt extremely repetitive in my opinion. Its all a thinly disguised rehash of the first movie, the plot is near identical and follows the same routine. The lads try to get in with the pretty folk, one or two of them manage to nab a sexy bird somehow, they all fall out over silly issues, they almost get their leg over but end up getting dumped in the end for a jock and then finally making up with each other. Hell even the verbal and visual gags are almost the same stuff rehashed but just slightly altered, instead of the 'pussay patrol' its now the 'banter brigade', worth a giggle but meh. The location this time made things more interesting and visually more exciting which I liked although I wish more had been set in the wilds of the outback. The short teaser trailers did tend to make you think that but alas twas no more than a tease. The finale is again all the same guff from the first movie literately scene for scene including the end credit extras, plus it does feel like they shoehorned in as many cast regulars from the TV show as possible when they didn't really need to be there (Jay's dad?). In the end I do think this is better than the first movie outing but only marginally. The Aussie setting is great but lets be honest here...this film could of been set anywhere as they don't really take much advantage of that Aussie factor. I do believe (personally) that this franchise has now run its course and should quite while its ahead, its become very repetitive and making another in yet another location may not succeed.