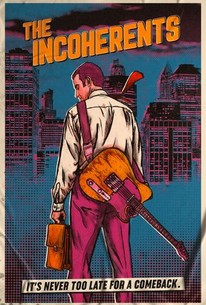 Bruce Flansburgh (Jeff Auer) is a bored, 40-something New York paralegal who hasn't let go of his dream of rock stardom. While slogging through an increasingly unbearable day to day existence, it dawns on him that the reunions of The Pixies, Soundgarden and other alternative/indie rock bands from the 90's could inspire his former group, THE INCOHERENTS, to reform. The group, each mired in some sort of midlife malaise, reunite their 90's indie rock band for one last shot at stardom.

Critic Reviews for The Incoherents

A midlife crisis "getting the band back together" comedy that was never going to amount to much more than an idle, not-unpleasant movie you sit through, but don't really enjoy.

A predictable underdog story that is well written. The music is straight out of the 1990's playbook. A flawed but fun movie.

It may not be incoherent, but it's not quite indelible either.

There are no featured reviews for The Incoherents at this time.